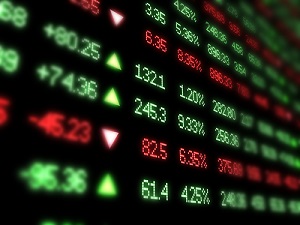 The Dow Jones Industrial Average pushed higher on Wednesday despite a downturn in crude prices and mixed earnings reports. The Nasdaq and the S&P 500 both slumped thanks to a lackluster sales forecast from Apple Inc. (Nasdaq: AAPL). Another positive round of economic data helped support market optimism and set the stage for a critical GDP report on Thursday.

Meanwhile, in economic news, sales of single-family homes surged in September despite evidence of tightening supply in the U.S. housing market. U.S. trade data showed that the nation's deficit narrowed. Finally, the October services PMI index jumped to 54.8 from 52.3 in September.

Today's positive data sets the tone for tomorrow's release of the third-quarter GDP report by the U.S. Commerce Department. Economists anticipate that the U.S. economy expanded by 2.5% in the third quarter.

The price of crude oil today is falling again as traders fret about the possibility of another global supply glut and the collapse of the September OPEC production deal. The WTI crude oil price today fell 1.6%, while the Brent crude oil price dipped 1.8%.

News of that lack of cooperation among OPEC countries and rising output in Nigeria offset a surprise drawdown in U.S. crude supplies. This afternoon, the Energy Information Administration reported that crude stockpiles fell 553,000 barrels last week. That shocked analysts, who had expected an increase of crude inventories by 1.7 million barrels.

Of course, the real story is the instability of the OPEC deal. Money Morning Global Energy Strategist Dr. Kent Moors says that the deal is on the brink of collapse, and he blames one unexpected culprit. Be sure to check out his latest insight and price forecast, right here.

But a big story today was the earnings report of casual dining giant Chipotle Mexican Grill Inc. (NYSE: CMG). The stock had its worst day of 2016, falling 9% after the firm reported a huge drop in quarterly sales after the bell on Tuesday. Same-store sales declined by 22%. The company badly missed Wall Street earnings expectations as well. The firm reported per-share earnings of $0.79, where analysts had expected $1.62 per share. The company also fell short of revenue expectations. CMG stock has been one that we have recommended you should avoid. In fact, back in September, we explained why the company's short-term rally wasn't sustainable. And investors should expect that CMG will only face more problems in the future.