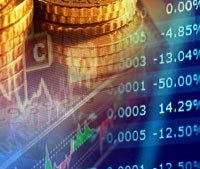 The Dow Jones Industrial Average slipped on Thursday after a round of weak economic data and mixed earnings reports.

DJIA Today: Markets Slide After Lackluster Round of Economic Data

The Dow Jones fell 29 points after a round of lackluster economic data rattled investor sentiment and real estate stocks slumped nearly 2%. After the bell, keep an eye on Amazon.com Inc. (Nasdaq: AMZN). The e-commerce giant will report quarterly earnings. Wall Street expects an EPS figure of $0.85 on top of $32.57 billion in revenue. Before today's AMZN earnings report, read our outlook on the Amazon stock price after earnings.

It appears that the markets are stuck in neutral until the November election. But it's very likely that we will once again see Washington divided by party and for political gridlock to reign again for the next four years. That's why investors need to establish a profit plan for what happens after the 2016 election. Money Morning Global Credit Strategist Michael Lewitt outlines a reason to be optimistic as an investor and how to bypass this toxic environment.

Meanwhile, in deal news, shares of NXP Semiconductors NV (Nasdaq: NXPI) gained more than 2% on news that it will sell itself to rival Qualcomm Inc. (Nasdaq: QCOM) for roughly $38 billion. This is the largest deal in the history of the semiconductor industry.

The price of crude oil today is on the rise after the Energy Information Administration announced a surprise drawdown in crude supplies. News of the inventory decline offset growing concerns about the stability of the OPEC production deal. While the markets are ignoring OPEC's problems, Money Morning Global Energy Strategist Dr. Kent Moors warns that the cartel's planned deal to reduce output is on the brink of collapse. Here's what you must know.

But a big story today was at Twitter Inc. (NYSE: TWTR). The microblogging company beat Q3 profit and revenue estimates and announced plans to slash its workforce by 9% (about 350 people) as part of a broad restructuring effort. The other big news: Twitter will discontinue its video application Vine, which plays short clips in a loop. The service has struggled to compete against Instagram, a service owned by rival Facebook Inc. (Nasdaq: FB).

Despite the surprise TWTR earnings report, you should be worried about the long-term health of this company. We explain why we are bearish on Twitter stock, right here.