When hunting for stocks to buy now, it's important to remember that just because a stock has enjoyed strong gains doesn't mean it's "too late" to add it to your portfolio.

In the past decade, Apple has rewarded patience time and again. 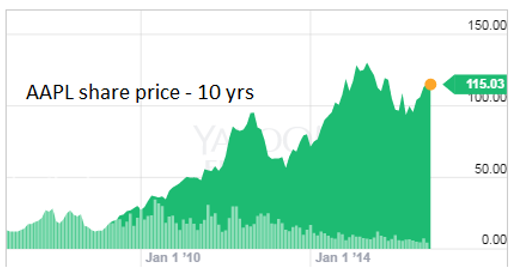 Knowing which high-flying stocks to buy will keep running is a skill not often found among stock pickers, but it's one that sets Money Morning Executive Editor William Patalon, III, apart.

In his five-year-old Private Briefing service, Patalon has not only recommended dozens of winning stocks to buy, he has re-recommended many of them to new subscribers who were able to pick up gains themselves as the shares continued to move higher.

And his very first pick has turned out to be one of his best investments...

This Biotech Is One of Private Briefing's Favorite Stocks to Buy

Patalon was attracted to Galapagos' strategy to target "orphan diseases," afflictions that strike rarely and so often go ignored by the Big Pharma companies. He also liked that Galapagos had more than 50 drug discovery programs underway, and that it already had licensing agreements with several bigger players in the industry.

When Patalon first recommended GLPG stock in August 2011, shares were trading at just $8.60. By September of the next year, the stock had more than doubled.

But rather than quit on the stock, Patalon recognized it had the potential to go much higher and re-recommended it. GLPG rose another 40% over the next seven months.

Even when Galapagos traded sideways through most of 2013 and slumped in 2014, Patalon stuck with it. He knew the biotech had the potential to break out. And break out it did.

In March 2015, he was making the case for Galapagos again - just in time for his loyal Private Briefing readers to reap big gains again. From the time of that March recommendation -- when GLPG was trading at $24.02 -- to the end of the year, the stock zoomed to $62.88. That's a gain of 162% in less than nine months. 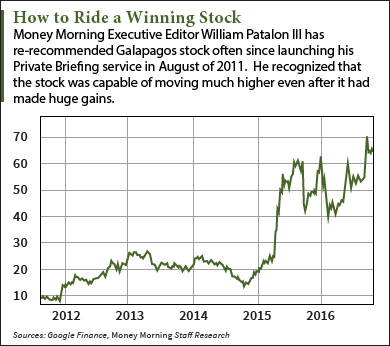 In fact, Patalon has re-recommended Galapagos more than a dozen times.

Earlier this month, Bill Patalon was writing about Galapagos yet again. He's convinced that even now, with GLPG stock up about 650% from where he first recommended it, that shares can go higher.

Based on yet another promising new drug in development, Patalon thinks GLPG stock has a good chance to reach $89 in the next year or so - a 39% gain from the current price of about $64.

But Patalon's success with Galapagos is hardly unusual. Since the launch of the Private Briefing service in 2011, he's shown an uncanny ability to identify stocks to buy that can deliver big gains many times over.

The full list of his picks is reserved for Private Briefing subscribers, but we're sharing two of his top stocks to buy with you today. He recently re-recommended both to his readers - who have already seen gains of 131% and 325%.

Where do I find your first time buys? I have learned from the past that chasing stocks up is a losing game. I want to follow you because your research shows you have done a good job so help me to locate first time hunches and X's etc.
I have lost too much money in 2016. I want to make up for it in 2017. Most of my money is in precious metals. PLG RGLD GGTCF GLDLF etc etc but I bought VUZI and Kratos Security both are down at the moment…I will hold for a 10% loss. HELP!!!