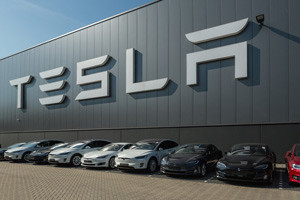 The Tesla Motors stock price is surging today (Thursday) after the company released a strong earnings report. TSLA shares soared more than 5% to $213.70 in early trading.

Here are some of the other key highlights of the Q3 Tesla earnings report...

Why Is Tesla Stock Higher? Earnings in Focus

The strong Tesla earnings report for Q3 shows strong company-wide execution in many areas. The company set new records for vehicle production, deliveries, and revenue. Company officials say that has lead them to profitability and positive free cash flow. They also show that Tesla has a good grip on the Model 3, Gigafactory, and SolarCity acquisition.

We've been bullish on Tesla stock for years. The company's strong Q3 results and upbeat outlook only reinforce our stance.

Still, we recognize the Tesla stock price can be notoriously volatile day to day. That's why we recommend shares for investors with some risk tolerance and a long-term view in exchange for some lucrative investment rewards.

Editor's Note: We've found a special profit opportunity for investors, but there are only a few days left to get all the details...