(Kitco News) – World markets were mostly on hold Friday, awaiting the big data point for the week: Friday's U.S. gross domestic product report for the third quarter, which is expected to see a rise of 2.5%, year-on-year. Many markets could become more volatile in the immediate aftermath of that report, especially if it is a miss from expectations. 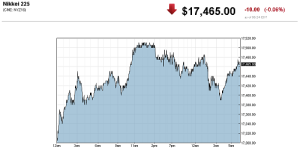 In other overnight news, the Euro zone October consumer confidence index came in at

-8.0 versus -8.2 in September. The Euro zone continues to feel the negative effects of the U.K. Brexit vote in June.

The bank said annual inflation in Russia stands at 6.2%.

The outside markets on Friday see Nymex crude oil prices weaker. There are growing doubts that OPEC will cut is collective crude oil output, despite its pledge to do so several weeks ago. The U.S. dollar index is also slightly lower on mild profit taking after hitting an 8.5-month high earlier this week.

Other U.S. economic data due for release Friday includes the employment cost index and the University of Michigan consumer sentiment survey.