No one can be right all the time - but I do my dead-level best.

I call it like I see it, and that means when I miscalculate, I own up to it.

Here's a case where I got the numbers right, but the timing wrong - and then I went ahead and took my prediction a step too far. If you'll recall, last December I released a bearish forecast for year-end 2016, predicting that (contrary to most Wall Street rhetoric) the S&P 500 would hit 1,875 before the end of the year. 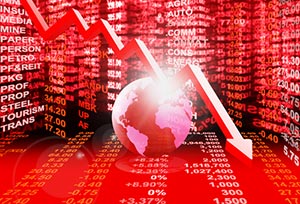 As it turned out, I should have left well enough alone.

It's been obvious for a while that the S&P 500 was not going to hit my revised year-end target of 1,650 to 1,750. As we enter Q4, we are in a market gridlock, with stocks hovering near record highs based on the misplaced belief that central banks are all-powerful. It will most likely take one of these two events to dislodge them.

So here's my new forecast...

Central banks have managed to convince markets that they can keep the overleveraged global economy from falling apart, despite signs of strain throughout the world. The collapse of global trade is just one sign that the post-crisis economic cycle is in its late stages. I was likely guilty of "marking to market" when I lowered my original 1,800 target to 1,650 earlier this year.

I now believe the market will end the year in the 2,050 to 2,100 range with a bias to the downside if (a) Italy votes against constitutional reform on Dec. 4 and (b) the Fed raises rates in December. (The odds of a Fed rate hike are continuing to rise and are now priced at over 70% in the Fed futures market.)

Italy is getting ready to vote on changing the Italian constitution on Dec. 4. The referendum would limit the powers of the Italian senate, which is viewed as a source of political gridlock. The vote is seen as a vote of confidence in the current pro-European Union government headed by Matteo Renzi.

If the referendum fails, it is likely to open the door for anti-EU parties to take over the government. Sources in Italy tell me that the polls are currently leaning toward defeating the ballot measure, something that markets are not expecting.

The Financial Times recently warned: "An Italian exit from the single currency would trigger the total collapse of the Eurozone within a very short period. It would probably lead to the most violent economic shock in history, dwarfing the Lehman Brothers bankruptcy in 2008 and the 1929 Wall Street crash." Coming from a publication not prone to hyperbole, this warning should be taken seriously. Italy is home to the world's third-largest bond market (after the United States and Japan) and the third-largest economy in the European Union (after Germany and France).

I'll have some specific profit recommendations for you before too long.

Whatever Italy votes, it's going to be a short burst because they'll make them vote until they vote correctly.