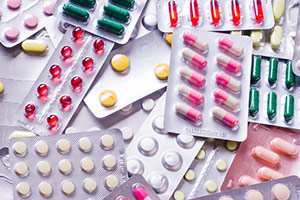 The VRX stock price closed Monday's session down 12.31% to $17.84. The stock tanked following a report from Bloomberg that the company is facing a new investigation by the DOJ for accounting fraud.

Valeant's former CEO Michael Pearson and CFO Howard Schiller are said to be the focus of the new investigation. The fraud is likely related to Valeant's now-terminated relationship with specialty pharmacy Philidor Rx Services.

Bloomberg reported that U.S. prosecutors are sifting through data for a possible fraud case against Valeant. Charges could be presented soon.

Related Content: This penny stock could double your money and save a dying industry at the same time...

Pearson was ousted from Valeant in March. The controversial CEO grew Valeant precipitously during his nearly eight years the helm. His tactic included acquiring smaller drug companies and then sharply hiking the prices of their drugs. The strategy eventually drew the attention and ire of some high-profile politicians and regulatory agencies.

Schiller, a former Goldman Sachs executive, announced in April 2015 that he was leaving Valeant after a little more than three years as CFO. Schiller said the decision was personal and not a signal the company's acquisitive streak was coming to an end.

By the summer of 2015, the Valeant stock price started its steady decline. The sell-off was sparked by a scathing report from short seller Citron Research, in which it called Valeant the "next Enron."

Since peaking in August 2015, Valeant stock is down almost 93%. Shares of VRX were once priced over $257 each.

Valeant is no stranger to controversy or investigations.

About a year ago, Valeant disclosed it was under investigation by several different U.S. regulatory offices.

On Feb. 29, the company disclosed the SEC was investigating its relationship (terminated in October 2015) with specialty drug distributor Philidor Rx Services LLC. The Valeant stock price sank to a three-year low following the revelation.

By March, Valeant had shed more than 90% of its market cap.

Money Morning advised readers early and often to avoid Valeant stock and any temptation to buy the dips.

And we maintain that stance on Valeant stock today...

Why Valeant Stock Is Down and Will Keep Falling