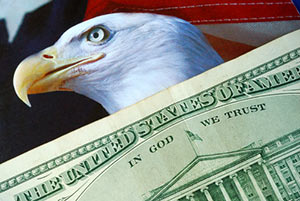 This morning, the Dow Jones Industrial Average was sliding again in pre-market hours as investors eye another round of earnings reports, new polls indicating a significant swing in voter sentiment in the 2016 election, and another monetary policy update from the Federal Reserve.

With so much uncertainty on tap, many investors are wondering if the next stock market crash is coming soon.

The Dow Jones Industrial Average projected a 27-point decline after the Los Angeles Times reported that Republican nominee Donald Trump has opened up a lead in a national poll. Reuters polling showed that Clinton held the lead on Monday, but a sudden decision by the FBI to dig into newly discovered emails has thrown the race back into chaos. With so much uncertainty ahead of the election, gold prices are pushing higher. Gold prices added 0.8% this morning and are hovering back near the $1,300 level.

Meanwhile, it's a busy week of economic data, headlined by the November employment report. The Labor Department will release the unemployment report on Friday. This morning, ADP released its monthly labor report for the private sector, and U.S. hiring cooled more than expected. Private companies added 147,000 positions in October, far short of the 165,000 expected by economists.

The price of crude oil today is falling after the American Petroleum Institute reported a surprise increase in U.S. crude inventories. The surprise increase in supply adds to existing negative sentiment on the status of the OPEC deal to cut production. Money Morning Global Energy Strategist Dr. Kent Moors explains there is a significant development in the geopolitics of oil that investors must know about right away. As he explains, a surprising rumor has OPEC scrambling, and it could unleash the next major wave of energy profits in the months and years ahead.

But the big story in pre-market hours is the Federal Reserve. America's favorite band of academic speculators will conclude their seventh meeting on monetary policy of the year. The Federal Reserve is not expected to raise interest rates until December, but eight years of monetary experimentation have the markets and the economy on edge. Money Morning Capital Wave Strategist Shah Gilani explains that the Fed's continued intrusion into the global economy isn't going to end well. Here's what you need to know and how you must protect yourself.