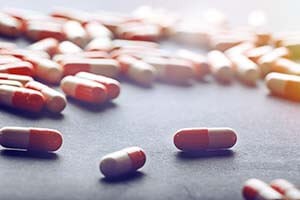 More Valeant Pharmaceuticals news broke late yesterday (Tuesday) when the company announced that it's in advanced talks to sell one of its key drugs.

According to The Wall Street Journal, Valeant is trying to sell its stomach drug business. The buyer is reportedly Takeda Pharmaceutical Co. The price tag is $10 billion. The purchase would include about $8.5 billion in cash and future payments to Valeant. The two drug giants could reach a deal for Valeant's Salix Pharmaceuticals Ltd. unit in the coming weeks.

Today, the VRX stock price has sold off some of those gains. Valeant stock was back down 9% in morning trading.

Up Next: This penny stock has much more than just triple-digit profit potential...

There's still no guarantee the companies will reach a deal. And the latest Valeant Pharmaceuticals news suggests another unidentified potential bidder is said to be in the mix.

Valeant issued a statement following the speculation. The company said management evaluates any transaction relating to core or non-core business units in accordance with the best interest of its shareholders. Officials said they are also in talks with third parties for various other divestitures.

While the Valeant Pharmaceuticals news is encouraging to some investors, we're still not buying in on Valeant stock. In fact, we still remain extremely bearish on VRX...

Valeant Pharmaceuticals News Is Not a Buying Opportunity

A sale involving Salix would significantly reduce concerns about Valeant's mountainous $30 billion debt load. It would also allow Valeant to unload an arm that so far has not lived up to expectations.

In December 2015, Valeant projected Salix's drug to cure IBS (its cash cow) generated $390 million in Q4. Yet Xifaxan for IBS generated only $207 million in revenue in Q4. That was a $180 million shortfall.

Valeant cited a number of reasons for the underperformance. Reasons ranged from the company's transition, its partnership with Walgreen's, and workforce turnover. But the real reason may be that patients just don't think Salix's IBS drug is worth the high co-pay.

Money Morning has been bearish on Valeant stock for more than a year. Our experts repeatedly warned investors about Valeant's predatory and unethical business model. They also advised against buying any dips or on any seemingly optimistic Valeant Pharmaceuticals news like Tuesday's.

The Valeant stock price is off 78.43% year to date and likely has more downside. The company reports Q3 results on Tuesday, Nov. 8, before the open.