Medical marijuana stocks let investors own a piece of one of the most profitable niches in the rapidly growing marijuana industry.

Medical marijuana sales currently account for the majority of the industry's sales. As of 2014, they represented 92% of $4.6 billion in overall marijuana sales, according to ArcView Market Research.

URGENT: Time is running out. On Nov 8, America will vote to legalize marijuana in nine states. Dozens of pot penny stocks could skyrocket instantly. Several have shot up 413%, 307%, and 172%, to name a few. The Roadmap to Marijuana Millions gives you 30 pot stocks which could double your money. Don't miss out on the greatest wealth opportunity of your life. Click here to learn how to get a FREE copy.

For investors, now's the time to get in on the fast-growing cannabis industry. On Nov. 8, nine states will vote on marijuana laws. Of these nine, polls in at least three states, California, Massachusetts, and Florida, indicate that propositions will likely pass. And 23 states have already legalized marijuana in some form. 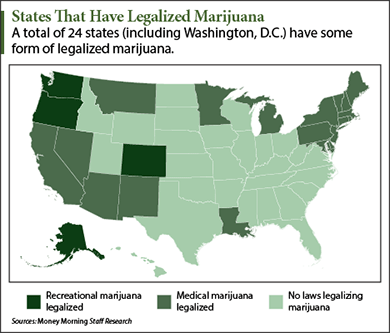 Of course, the rush of companies into this space means investors need to be careful when looking for profits. That's where we can help...

When searching for the best medical marijuana stocks, it's important to look for companies that either already have approved drugs and treatments, or are otherwise conducting late-stage clinical research.

For the three medical marijuana stocks we've found today, we've made sure that their companies already have solid pipelines, with marijuana drugs that are already on the market or at least approved by the Food and Drug Administration.

What's more, two of these companies have diversified pipelines. This means even if their companies' marijuana efforts don't catch on, you don't have to worry about the stocks tanking. They have other successful non-marijuana drugs to fall back on. 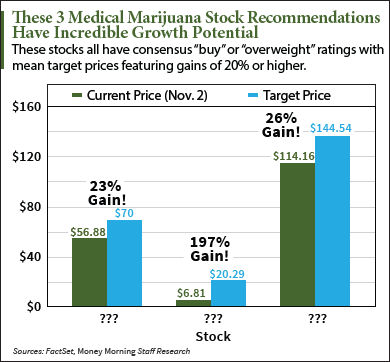 These stocks are so promising, almost all the analysts that track them have given them "Buy" or "Overweight" ratings, with target prices representing growth of 20% or higher.

One last thing to note: These medical marijuana stocks and the companies focus on medical conditions we know cannabis-based medication can treat. Most notably, for pain, nausea, and appetite-enhancing applications.

Unlike other medical marijuana companies that target more obscure treatment areas (i.e., using cannabis to treat cancer), our three companies have drugs that are much more likely to pass clinical trials (or already have).

Let's take a look at three of the most promising medical marijuana stocks on the market now...

Do you have a list of , let's say , the top 20 penny stocks that are most talked about. OR is that just to easy ? I have just started with stocks, and I really don't know what l'M doing. But I will do this before the 7th if it kills me,Ha!

Trying frantically to buy some pot stocks on this monday. I think it's a great idea. Looking at GW, Cara, and 22ndcentury. What's your faves?

let's rich on the green

how about medical device companies like this one http://bit.ly/tsiemail105