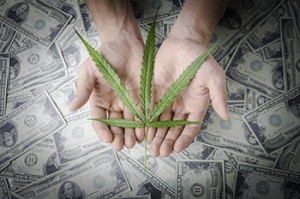 On Nov. 8, recreational marijuana legalization in Massachusetts will be determined by voting “Yes” or “No” on Question 4.

Voting “Yes” on Question 4 supports the proposal to legalize recreational marijuana. A commission will be created to regulate the cannabis industry in Massachusetts, and marijuana will be regulated similarly to alcoholic beverages.

Anyone who is 21 or older in Massachusetts would be able to possess (under 10 ounces inside a home and one ounce in public), use, and grow marijuana.

Massachusetts residents would be able to grow up to six marijuana plants in their home.

But the new marijuana law would allow property owners to prohibit the sale and production of marijuana on their premises. It would also allow employers to prohibit consumption of cannabis by employees in the workplace.

State and local governments can continue to restrict marijuana use in public buildings and near schools.

This vote is only for recreational marijuana because Massachusetts has several medical marijuana laws already in place.

Here are the current marijuana laws in Massachusetts before the vote on Question 4.

History of Marijuana Laws in Massachusetts

For the last eight years, the majority of Massachusetts voters have been in favor of marijuana reform and legalization.

In 2008, a ballot passed to decriminalize possessing small amounts of marijuana. The possession of one ounce of marijuana became punishable by a fine of $100, and the possessor of the cannabis would not be reported to the state’s criminal history board.

Prior to the passing of the Massachusetts Sensible Marijuana Policy Initiative, people charged could have had to pay a fine of $500 and face up to six months in jail.

Question 3 eliminated civil and criminal penalties for the possession and use of up to a 60-day supply of marijuana for those with a state-issued registration card. With a physician’s recommendation, patients with glaucoma, cancer, and other health issues can receive a registration card.

And the majority of voters right now seem in favor of legalizing recreational marijuana in Massachusetts.

According to a Suffolk University/Boston Globe Oct. 24 to Oct. 26 poll, 48.8% of voters are in support of Question 4.

And these are some of the biggest supporters of Question 4…

According to Ballotpedia, the committee called “Yes on 4” has raised over $6.3 million dollars in support of Question 4.

Supporters of marijuana legalization in Massachusetts include:

But there are those opposed to Question 4…

Who Is Against Question 4?

The “Campaign for a Safe and Healthy Massachusetts,” “Safe Cannabis Massachusetts,” and the “Smart Approaches to Marijuana Action” have raised over $2.8 million in their fight against marijuana legalization.

Opponents of Question 4 include:

The opponents of Question 4 argue that legalizing recreational marijuana allows people to grow thousands of dollars of marijuana in their homes, even if neighbors object. Opponents are also afraid that legalized marijuana will harm children, as they could confuse marijuana edibles with candy, gummy bears, and cookies.

These are the arguments for and against legalizing marijuana in Massachusetts.

Before making a decision, Massachusetts voters should know exactly what the revenue from Question 4 will fund and how much Massachusetts could make from marijuana legislation.

Where Will the Money Go for Question 4?

If Question 4 is approved, retail marijuana would be subject to state sales tax with an additional 3.75% excise tax, according to Ballotpedia.com. Local municipalities would also have the option to add another 2% tax on retail marijuana.

Revenue received from license application fees, excise taxes, and fines for violations of the law will be placed in a Marijuana Regulation Fund.

This fund will help pay for the administrative costs created by the new law.

If marijuana legalization passes in Massachusetts, it could net the state millions in revenue…

With four other states voting on recreational marijuana laws, you can plot your course to a seven-figure weed windfall with the top pot stocks from every ecosystem – growers, edibles, dispensaries, and more…

The Initiative to Legalize Marijuana in America Is Growing Rapidly…

Yes the Catholic Church is using $850,000 to campaign against it. When they get tax breaks it means everyone else pays their taxes for them. Yes they care about youth–in the very wrong way. Use that money to pay their victims.

Im pretty tired of this issue. There is absolutely no justification for being against legalized cannabis at this point.
1) Everyone who wants to be smoking already is.
2) Legalization allows for tax revenue to be generated instead of the money flowing into organized crime.
3) Legalization decreases teen use (as found by the Colorado Department of Public Health)
4) Legalization ensures product safety and consistent quality.
5) Alcohol is legalized and is much more harmful than cannabis.

There shouldn't even be a debate about this. The issue is clear cut. Legalization is good for everyone except those who are making money off the war on drugs, pharmaceutical companies, and alcohol companies.

mary B
Reply to  Chares

Except for those who live next door to a home that is growing marijuana.
The stink and smell of skunk every night as they vent there grow rooms.
We as citizens have no rights any more. We pay our taxes too. yet we no longer can sit outside on a summer evening and enjoy our back yard!
Be careful what you vote for. I just hope some of the greedy politicians can have a grow house neighbor too someday!