The first election I can clearly remember was Johnson vs. Goldwater in 1964. I know what you're thinking - no, I don't feel that old.

I was not yet school age, sitting in the back of our white Chevy Nova station wagon, just taking it all in. I can clearly remember my mom and dad discussing the election and why they liked their candidate. They were still discussing it when we went to the local polling place.

The main thing I remember about that impromptu, front-seat Johnson-Goldwater debate was how civil and reasonable mom and dad were; they were both passionate supporters of their candidate, but of course there were none of the emotional outbursts or attacks that have come to define this election.

And that's not just a feeling. Numerous polls have confirmed this thought dating all the way back to 2015.

I mention all this because it has everything to do with how the market will move in the next week.

Even if you think Secretary Clinton is untrustworthy or corrupt (the two top reasons respondents gave for why she is unlikeable), when candidate Clinton was far ahead in the polls, the market were stable and moving up.

As candidate Trump (who has polled as unlikeable for perceived sexism, racism, and myriad other reasons) has gained ground, markets have dropped.

That's because the word that traders fear has come roaring back into play: uncertainty.

And that uncertainty has led to a very interesting occurrence - eight straight down days in the S&P 500.

And while that down period has been much more prolonged than normal pullbacks, it has also been very shallow. It's been less like a cliff dive and more like the air leaking out of a tire. This is what it looks like on the chart: 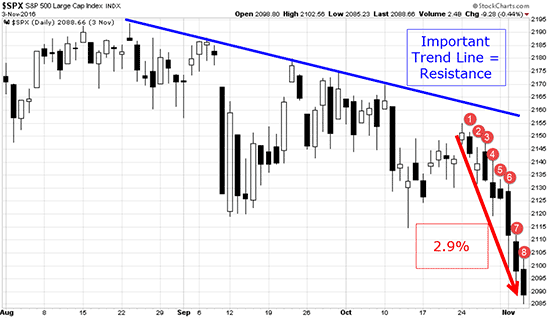 When you get eight straight down closes on the S&P 500, some interesting things start to happen.

For one thing, there have been 28 instances of such long declines since 1928, with an average loss of 7%.

However, this current slump has seen us give up just 2.9% - the individual daily drops have been less than 1%, and at some point during each of these eight days, the markets have been positive.

Like I said, this drop has been shallow, but it nevertheless has cracked our "Line in the Sand," a key technical level:

I agree with the one who said that this election is mainly about personalities. Neither of the candidates have been candid about the economy or the environment, both of which have gone into dangerous territory during the past few years. This worries me more than which one is going to win. Another thing that bothers me is that those who are worried about the economy do not seem to care about the environment and vice versa. Too many people seem to be unconcerned about the importance of both, but the truth is that we cannot have a civilized society without them. History has proven time and again that if the economy breaks down, the entire society falls apart and if the environment becomes unlivable, we cannot survive. There is also another consideration, namely the mixture of religion with politics. Here again history has proven so many times that the two must be kept separate, or there are dangerous consequences, because one religious sect tends to gain the upper hand, and a vicious dictatorship is formed.

Good write-up. I absolutely love this site. Keep it up!