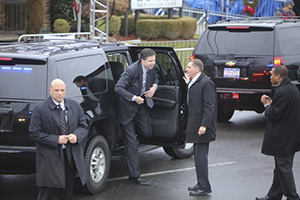 The Dow Jones Industrial Average surged Monday after the Federal Bureau of Investigation cleared Democratic nominee Hillary Clinton (again) of any wrongdoing in regard to her private email server and new emails discovered on an aide's laptop. It was a huge day for the S&P 500, which snapped a nine-day losing streak. The CBOE Volatility Index (VIX) - typically known as the market's fear gauge - fell 15.9% to below 19.

Let's look at the final numbers Monday for the Dow, S&P 500, and Nasdaq:

The Dow Jones surged 371 points after the FBI cleared Hillary Clinton in its latest email probe. In a letter to Congress, FBI Director James Comey said in a letter to Congress Sunday that the agency had "not changed its conclusions" that it reached in July about Clinton's intent to send sensitive government material across her private email server. Overall, risk appetite has increased with the announcement. Here's why.

Money Morning Chief Investment Strategist Keith Fitz-Gerald explains that many investors still think that Trump could win, which might propel a massive sell-off. But readers should have a bullish stance after the election. As Fitz-Gerald explains in this interview with FOX Business, opportunities are emerging and you can make a lot of profits following Tuesday's election.

The price of crude oil increased on election news and optimism regarding OPEC's production deal. The secretary general of OPEC announced that the global oil cartel was committed to the global output deal signed by members in September. Concerns about the deal have accelerated in recent weeks due to geopolitical tensions between Saudi Arabia and demands for an exemption by the nation of Iraq. Despite OPEC's production cap, further cuts are likely needed to balance out supply and demand in global markets in 2017.

Must See: Get Our Bold 2017 Oil Price Forecast — Plus Today's Most Profitable Energy Play…

Of course, the big news today is the news of tomorrow. On Tuesday, voters will go to the polls to decide the 45th president of the United States. The markets largely anticipate that Americans will vote for Clinton. According to a CNBC Fed Survey released this morning, 46% of investors want Hillary Clinton to win, compared to 23% for Donald Trump. Most striking about the poll is that 14% of those taking the survey answered "Don't Know."

Up Next: Access our top five investing research reports to help you grow your money and achieve the kind of outsized returns that will set you up for a healthy retirement. These reports feature our best profit-boosting strategies and stock picks. Get them, right here.