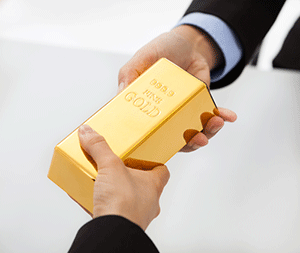 Money Morning Resource Specialist Peter Krauth just revealed his new bullish 2016 gold price prediction for after the U.S. presidential election. In it, he describes how gold should outperform the markets over the next month.

And the election isn't the only reason he's bullish on gold…

Before we get to that, here's why gold prices have been volatile ahead of the election…

The new emails were found because of an investigation of Anthony Weiner, a former congressman accused of sending illicit messages to a minor. Weiner's wife, Huma Abdein, who is a top Clinton aide, used Weiner's laptop to send messages to Clinton.

According to USA Today historical poll averages, 45% of voters were voting for Clinton as of Oct. 27, compared to 40.4% for Donald Trump.

However, the race got much closer because of the new email investigation. On Nov. 3, 45% of voters still favored Clinton, but 43% were voting for Trump.

Because many investors had been expecting a Clinton presidency, the news created volatility in the stock market. That volatility helped gold prices climb.

You see, gold is viewed as a safe-haven investment during times of uncertainty.

In comparison, the Dow Jones Industrial Average dropped 1.19% during the same time.

The other reason Krauth says gold prices have been volatile is the Brexit.

On Nov. 3, the UK High Court announced Britain could not leave the European Union (EU) without a ratifying vote from parliament.

The potential negative consequences of leaving the EU were bullish for gold prices because they created uncertainty.

Must Read: Get the Best Investing Research Today to Grow Your Money

But because this puts doubts on whether or not Britain will actually leave the EU, investing in gold became less appealing.

Gold prices have dropped 1.6% since Friday. But no matter who wins, this is the catalyst for gold prices investors should be watching in Krauth's gold price prediction…

Our Gold Price Prediction After the U.S. Presidential Election