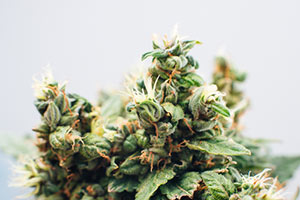 We're one day from the election, and there are a number of marijuana initiatives on state ballots.

A record nine states have marijuana initiatives on the ballot this year.

Legal use of recreational marijuana is on the ballot in Arizona, California, Maine, Massachusetts, and Nevada. If passed, those five states will join Alaska, Colorado, Oregon, Washington, and the District of Columba, where adults are free to use marijuana recreationally.

Medical marijuana initiatives are on the ballot in Arkansas, Florida, Montana, and North Dakota.

Twenty-five states have already passed laws allowing marijuana for medicinal uses. Four states and Washington, D.C., legally allow recreational use. Those numbers could climb to 29 and nine, respectively, on Tuesday.

Proponents think these initiatives will pass in the bulk of these states on Tuesday since America's stance on pot has significantly changed over the last several years.

NOV. 8 VOTE: Get Rich from Legal Weed. Soon, the DEA Can't Stop You.

The majority of American adults (57%) say marijuana use should be made legal, a new Pew Research Center survey shows. That's a stark contrast to a decade ago, when 60% opposed it.

Growing marijuana acceptance and legalization has created massive industry growth. And that's one of the reasons we're bringing you the top marijuana stocks today.

Legal marijuana sales grew to $5.7 billion in the United States in 2015. That was a sharp increase from $4.6 billion in 2014, according to ArcView Market Research. Recreational sales surged to $1.2 billion last year from $374 million the year before.

By 2020, legal market sales are expected to surpass $22 billion. And that growth will continue to be a massive catalyst for the top marijuana stocks on the market.

Here are three of the best marijuana stocks to watch now…

Why the Top Marijuana Stocks Are Soaring Now

In a sign of how quickly the marijuana industry is growing, Cowen & Co. now has a marijuana analyst. Vivien Azer of Cowen said if 2016 marijuana initiatives are passed, the legal marijuana market could more than triple in size from a current $6 billion, Barron's reported this weekend.

The marijuana industry is on the cusp of becoming a key disrupter. Azer said the pot market threatens other industries.

The analyst, who also covers the alcoholic beverage sector, notes that some companies in the space are starting to cite competition from marijuana as a danger factor in their annual reports.

Aurora Cannabis Inc. (OTCMKTS: ACBFF) focuses on cultivating, harvesting, and selling medical marijuana. At $1.59, shares are up 278.61% so far this year.

And those are only three of the top marijuana stocks on the market.

And as a service to Money Morning readers, we've created a 90-page cannabis investing guide called "The Roadmap to Marijuana Millions." This "bible of weed investing" reveals the world's top marijuana stocks every serious investor should consider right now. Normally valued at $499, it can be yours absolutely free. To learn how to get your free copy, click here. This offer is only available to the first 500 people who respond today. So please go here now to reserve your copy.