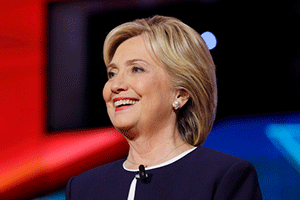 The Dow Jones Industrial Average pushed higher as markets bet on Hillary Clinton to win the 2016 presidential election. Wall Street anticipates that Clinton would provide greater stability for the markets. According to FiveThirtyEight, Clinton has a 71.4% chance of winning today.

If Clinton wins, it likely will not be by a landslide. The CBOE Volatility Index (VIX) - commonly known as Wall Street's "fear index" - fell 0.5%. The slight downturn in the VIX comes a day after the largest single-day decline in volatility since June.

The Dow Jones gained 72 points as investors placed their bets on Hillary Clinton winning the U.S. election. The news came on the same day that the U.S. Labor Department announced that the number of Americans quitting their jobs hit a 15-year high in September. Many economists see this as a sign that leverage in the U.S. economy has flipped toward employees, which could fuel increased wage growth in the months ahead.

While everyone is fretting over the election, the timing of the next interest rate hike has slid under the radar. This morning, Chicago Federal Reserve Bank President Charles Evans raised his concerns that inflation is not ticking up toward the central bank's 2% goal. In a speech at the Council on Foreign Relations, Evans said that lower inflation remains "one of the larger risks" facing the central bank.

The price of crude oil was flat during the election-day session. Dr. Kent Moors, Money Morning's Global Energy Strategist, notes that the oil market is currently seeing a high level of volatility because of the election. The crude oil volatility index is hovering near its highest level since September. Here's Moors' latest insight on crude prices and today's big election.

Of course, the big news today is the news of tomorrow. We have to be honest about the state of the U.S. markets. Money Morning Global Credit Strategist Michael Lewitt explains that almost every individual and institution touched by this election has been brought to their knees - the media, Justice Department, FBI, the candidates, their surrogates and supporters, both political parties, and those holding high office. Lewitt explains that the markets cannot handle either candidate right now. And that's why he recommends that you take this position starting now.