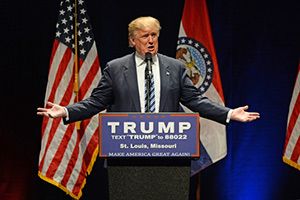 Election Day 2016 is finally here, and the race is too close to call. The biggest thing many Americans are wondering now is how many electoral votes Donald Trump has.

Of course, we don't have specific totals yet. But we do know how Trump could win enough electoral votes to get him to the Oval Office.

First, here's why electoral votes are so important.

The Electoral College is comprised of 538 electors who cast votes to decide the president and vice president of the United States. The number 538 is the sum of the nation's 435 Representatives, 100 Senators, and three electors allotted to the District of Columbia.

When voters go to the polls today (Tuesday), they will be choosing which candidate receives their state's electors. The candidate who receives a majority of electoral votes (270) wins the presidency.

NOV. 8 VOTE: Get Rich from Legal Weed. Soon, the DEA Can't Stop You.

Trump is expected to win 21 states essentially by default. These 21 states have traditionally always voted for the Republican candidate. In total, they add up to 163 Electoral College votes. The 21 states are:

While these states are mostly foregone conclusions, there are numerous battleground states that bear watching…

How Many Electoral Votes Does Donald Trump Have in Battleground States?

Next, there are two states that typically vote Republican, but where Democratic candidate Hillary Clinton appears to be running close in polls. The consensus is that Trump will win these two states, but it will be close:

Wins in these two sates, plus the traditional red states, give Trump 190 electoral votes. So, he still needs 80 more votes to make it to the White House.

That brings us to the six battleground states. They are:

Electoral College votes in these states add up to 80. That means if Trump sweeps these six states, as well as all the others cited above, he reaches exactly 270 electors. And that means he will become the 46th president of the United States.

It's a tall order. But it is by no means out of the question.

Up Next: The Next Interest Rate Hike Will Light the Fuse on These "Debt Bomb" Companies