This tawdry circus of an election has carved deep scars on the American soul that will persist long after Jan. 20, 2017.

But at least the contest itself is almost over.

The FBI may have closed its investigation into Hillary Clinton's use of a private email server, and Donald Trump may yet prevail when he answers the troubling lawsuits he faces, but the reputation of virtually every individual and institution touched by this election is ruined - the media, Justice Department, FBI, the candidates, their surrogates and supporters, both political parties, and those holding high office.

As of this morning, the so-called elite political class has disgraced itself on a daily basis for more than a year.

They'll be no help at all. We will be left to pick up the pieces after today.

The markets are finally realizing this, too; they're starting to react to the turbulence ahead, but they are dangerously, shockingly complacent.

So here's what I see happening with your money, whatever the outcome of this farce of democracy will be...

The Market's Don't Expect Trump... but They Can't Handle Hillary

U.S. stock markets demonstrated an amazing ability to ignore the unfolding political train wreck throughout the month of October. 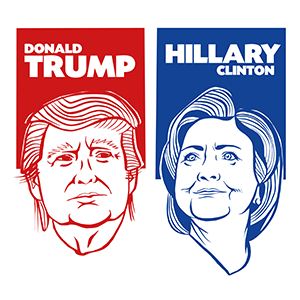 They began the month of November looking a bit green around the gills, though it is difficult to determine whether it was politics or nervous credit markets that were the cause.

Both ETFs only lost a couple of percentage points, but this particular trend is not investors' friend. and high-yield jitters often portend equity market weakness.

The real question is what happens if Donald Trump wins the presidency...

No matter what kind of handwringing happens at CNBC, equities could sell-off sharply as investors wrestle with an outcome that was not priced in to the market. In that case, we can expect many of our favorite short positions, like Deutsche Bank AG (NYSE: DB), to head straight down. You can get some of those recommendations here, here, and here.

On the other hand, if Hillary Clinton squeaks by, the relief rally that many expected may not materialize, since her victory sends the country straight into political paralysis and constitutional crisis that leaves us vulnerable to geopolitical and economic threats. Since market valuations are already extended, the sell-off could be serious until cooler heads prevail.

If Hillary Clinton wins - and she still maintains an Electoral College advantage - she looks forward to a presidency paralyzed by partisanship and ugly accusations. Unlike Barack Obama, she won't enjoy a honeymoon in which Democrats control Congress and will have to work with Congress - if anyone in Congress will risk their careers and reputations to work with her.

This Outcome Looks Likely, No Matter the Winner

Are you kidding me? The Dems have been mud slinging for decades and now you want to whine? You are who I've lost all respect. The truth will win in the end.