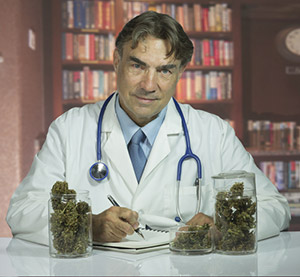 According to a St. Leo University poll conducted between Oct. 22 and Oct. 26, 71.3% of Florida voters are in support of the Florida Medical Marijuana Legalization Initiative, also known as Amendment 2.

Those results were similar to a Florida Chamber of Commerce/Cherry Communications poll conducted between Sept. 15 and Sept. 20. In that poll, 73% of Florida voters were in favor of legalizing medical marijuana in Florida, 22% were against it, and 5% were undecided.

Currently, Florida does allow medical marijuana use, but it's limited.

The Compassionate Medical Cannabis Act of 2014, which became effective on Jan. 1, 2015, allows physicians to prescribe non-smoked cannabis, low in THC, to qualified patients.

In order to be prescribed medical marijuana, the patient must suffer from cancer or a physical medical condition that chronically causes symptoms likes seizures or persistent muscle spasms.

If Amendment 2 passes, it would allow the use of medical marijuana for treating diseases that include symptoms other than spasms or seizures.

According to Ballotpedia.com, Amendment 2 would allow for medical marijuana treatment in Florida to be extended to those with a variety of chronic illnesses.

Those illnesses are listed in the following chart. 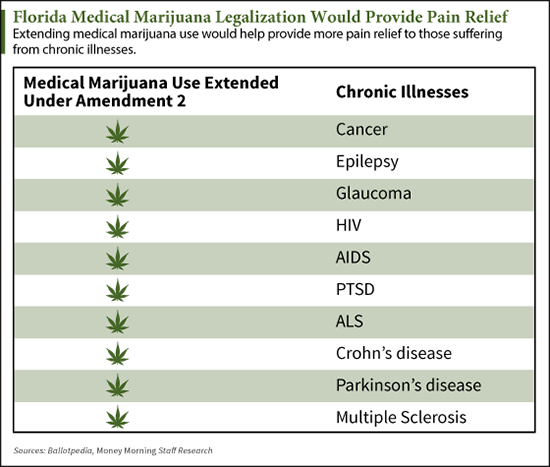 The 2016 Florida Medical Marijuana Legalization Initiative clarifies the requirements for parental consent for medical marijuana use by minors. It also clarifies what is meant by a "debilitating" illness that would qualify for treatment.

Amendment 2 also makes clear that doctors would not be immune from malpractice claims for negligently prescribing marijuana.

But the main reason why Amendment 2 didn't pass in 2014 is Florida's state constitution requires 60% of a supermajority vote for an amendment to pass.

Those in favor of Amendment 2 say marijuana provides relief for patients suffering from debilitating illnesses. Supporters also argue that marijuana has less serious side effects than most available prescription drugs.

Trending Story: Why Cannabis Stocks Are Set to Soar This Week

Supporters of Amendment 2 include:

But even though the majority supports Amendment 2, there are those still opposed to extending the use of medical marijuana…

Against Amendment 2 in Florida

According to those against Amendment 2, increased medical marijuana access will allow greater use of marijuana by young people. Opponents also argue plant-based medicines have unique quality control problems and that definitions and terms in Amendment 2 are still vague.

That could create opportunities for fraud and abuse, opponents argue.

Along with Florida, there will be nine other states voting for marijuana legalization.

Colorado has already netted millions in taxes from legalized marijuana sales. In 2014, Colorado collected $76 million from taxes, and $135 million in 2015.

But local governments aren't the only ones who can profit from the legal marijuana industry.

You see, cannabis is now the gold rush of the 21st century…

The Initiative to Legalize Marijuana in America Is Growing Rapidly…