At first the U.S. dollar reacted badly to the prospect of a Donald Trump presidency.

But Wall Street's fear dissipated this morning (Wednesday). The U.S. dollar not only recovered, but by midmorning was trading slightly higher.

That shift in mood was reflected in the stock market as well, with most markets up just under 1%. 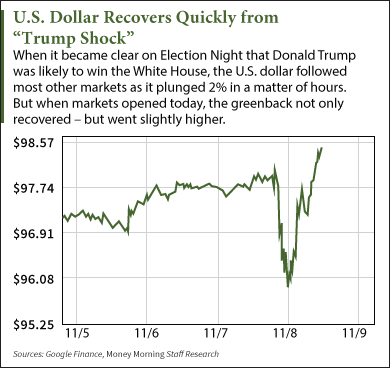 The Mexican peso was hit much harder, plunging more than 13% on election night. The peso was still down 7% against the U.S. dollar in midday trading today.

A possible reason for the sudden reversal in sentiment is that Wall Street realized some of President-elect Donald Trump's policies could be good for the dollar...

Why the U.S. Dollar Rebounded in Wake of Trump Victory

During his campaign, Trump said he would get better trade deals, enact tax cuts, and lower corporate tax rates to encourage repatriation of $2.6 trillion in foreign profits that U.S. companies have stashed overseas. All of those would have a positive impact on the U.S. dollar.

Trump also helped ease concerns in his victory speech. Instead of talking about tariff increases, he promised cooperation with other countries. The softer tone was apparently enough to bring traders in off the ledge, at least for now.

"He could have stood up and listed off China, NAFTA, the wall - he didn't go anywhere on those policies, so that will be at least somewhat reassuring to markets," Derek Halpenny, European Head of Global Markets Review at MUFG in London, told Reuters.

Now, with the divisive election over, investors can expect fewer distractions to deter a strengthening U.S. dollar.

And make no mistake. The forces that have been pushing the U.S. dollar higher over the past two years remain in place and are likely to grow even more powerful in the months ahead.

The U.S. dollar launched its recent run back in 2014, when it rose 21% against a basket of other major world currencies.

That run leveled off earlier this year, with the U.S. dollar slipping about 8% when the U.S. Federal Reserve declined to raise interest rates at the March Federal Open Market Committee (FOMC) meeting.

The decline was short-lived, as the U.S. dollar's catalysts had the greenback again moving higher by May. Since then the greenback is up 4.4%, and it's poised for an even bigger move as we head towards 2017.

You made the statement that Trump would "force U.S. companies to repatriate foreign profits (which would then be taxed)". That is a completely false statement. That sounds just like the mainstream liberal media. Trump would let companies bring back these profits tax free to stimulate our economy. There's no forcing or taxing going on here!

Thanks for reading Money Morning. You are correct. The sentence regrading foreign profits was very poorly phrased, and inaccurate. I have updated the story accordingly. You may also want to check out this story.

Do u have an idea if or when the Canadian dollar will get stronger.

So when the dollar goes higher does the price of gold & silver come down in price?