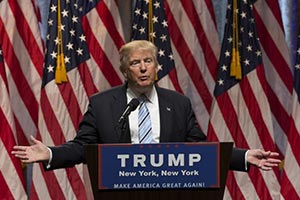 The latest estimates from the Social Security Administration released June 22, 2016, show that the entire program will be insolvent by 2034.

This means before then, legislators will be forced to contemplate two options:

So which does the new president-elect favor — will Donald Trump cut Social Security benefits, or will he raise taxes?

Will Donald Trump Cut Social Security Benefits? Yes, but Only for One Group

Put simply, Trump wants to cut Social Security benefits. But not all of them, and not for everyone involved.

On Oct. 11 at the No Labels "Problem Solver Convention" in New Hampshire, Donald Trump said he and his rich pals should "voluntarily forgo" their Social Security benefits.

The real estate magnate claimed this would bolster the health of the retiree entitlement system.

Quick reminder: "Entitlement programs" include Social Security, Medicare, and Unemployment Insurance. These are all systems into which U.S. taxpayers must pay throughout their entire working lives in order to benefit from them later.

At the conference, Trump said rich taxpayers should sacrifice these benefits for the good of the country.

"I have friends that are worth hundreds of millions and billions of dollars and get Social Security. They don't even know the check comes in," the real estate magnate stated, according to The Wall Street Journal on Oct. 12.

When asked to be more specific on how such voluntary sacrifices from America's wealthy would equate to a deficit reduction measure, he stated:

Sounds like a reasonable solution. I still smell a rat.