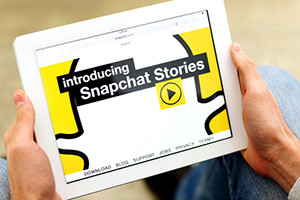 In our latest Snap Inc. stock news, the popular social media app just snagged a big investor ahead of its IPO.

But there are no details on when Google made the purchase or the amount of Snapchat stock Google now owns.

This investment unit has also backed thriving startups like Airbnb, Glassdoor, and SurveyMonkey. Alphabet's other venture capital arm for early-stage companies, called GV, has invested in Uber and Nest. Goggle eventually acquired Nest for $3.2 billion in 2014.

And just like with Airbnb and Nest, Google wants in on the ground floor of this hot startup company…

The Snapchat app lets users send photos through their smartphones that automatically disappear after a few seconds.

It's a favorite among teens and celebrities.

Snap Inc. has hired Morgan Stanley (NYSE: MS) and Goldman Sachs Group Inc. (NYSE: GS) as lead underwriters for its upcoming IPO. The Snapchat IPO could end up valuing the company between $25 billion and $35 billion.

Ahead of the inevitable Snapchat IPO, Money Morning wanted to make sure our readers were prepared. That's why we have a free, exclusive Snapchat stock guide. You can find the guide, right here.