Older folks – including all those baby boomers reaching retirement age – are confronting a slew of age-related ailments, including glaucoma, cancer, arthritis, and back pain.

Cannabis-based remedies, as researchers are discovering, are uniquely suited to treating those diseases.

In other words, because of marijuana's newly understood medicinal properties, it's changing "How We Thrive" in the Singularity Era.

As that elderly population grows – and as it begins to grasp how well cannabis works to treat numerous diseases – so will the size of the medical marijuana market. And as I've been telling you in recent days, that makes legal marijuana one of the biggest profit opportunities I've ever seen.

In fact, "It is the biggest thing I've ever seen."

That's not me talking – but the CEO of a Fortune 1000 firm who's got a plan to "invest, like, half a billion in the pot business."

This move may have been risky – but it's looking like a success.

The company's first two "pot acquisitions" have already increased sales by more than 20%. That's nearly four times the growth rate of the rest of the company, and operating margins are on track to be about 30% higher than the company average.

Plus, the firm's profits are up 50% in the last four years.

So, as more and more states legalize cannabis, this company's shares will soar 30% in just the next 12 months… and beyond.

And so will its shareholders' profits… 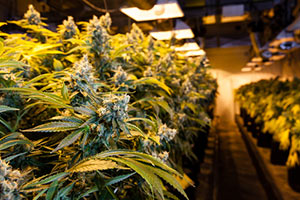 While the legalization of marijuana is creating the need for acres and acres of professionally grown cannabis, you shouldn't forget the little guy.

After all, for decades thousands of consumers have been growing their own, even while risking trouble with law enforcement. By one estimate, $60 billion worth of illegal pot is grown each year in the United States.

But with marijuana legal, the number of people looking to cultivate it for their own consumption is likely to skyrocket.

And while this opens up an opportunity for firms that cater to growers and gardeners, it also presents those firms with a strategic dilemma…

I used to live in CO and knew many growers.

None of them ever used Miracle Grow.

In fact many of the growers bibles tell you NOT to use Miracle Grow
because it changes the taste of the product.

Been wanting to purchase marijuana stock for some time now. 2018 seems to be investing time for me please advise