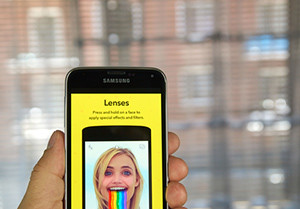 Large investors and institutions could make millions from the Snapchat IPO, but retail investors who buy Snapchat stock won't profit like the big players on Wall Street.

Think of it this way. If a stock has an IPO price of $20 and then hits the market to extremely high demand, the price will soar in a matter of seconds. That inflated price is where retail investors have to buy in.

Today, we are going to share with our readers an investing strategy when Snapchat stock is publicly traded. We will also provide you with a complete guide covering everything you need to know about Snapchat stock and the Snapchat IPO.

But first, we wanted to answer some of the most common questions we've received about the social media app before the Snapchat IPO…

Snapchat is one of the most popular apps among teenagers and millennials. The mobile app began as a way for users to share images and video with their smartphones that disappeared after a short time.

These "snaps" and "stories" last up to 24 hours and have now evolved into something much more.

Today, Snapchat is becoming more mainstream. It's grown its user base to 150 million daily active users (DAUs), and 38% of Snapchat's users in the United States were between the ages of 25 and 54 as of February 2016, according to research site Statista.

These numbers are expected to keep climbing. And with a growing user base, our readers have been asking us about Snapchat's monetization.

The first way Snapchat makes money is through "Sponsored Lenses."

This feature allows users to take pictures of themselves with different animated filters.

For example, 20th Century Fox created a Sponsored Lens that allowed Snapchat users to take a selfie with characters like Snoopy from "The Peanut Movie." Sponsored Lenses and geo filters (ad-like invitations that show users when and where an event is taking place) could generate $102 million in revenue by 2016, according to eMarketer.

The second way Snapchat makes money generates the bulk of its revenue: advertising.

Discover launched in January 2015. It allows users to subscribe to channels of brands or public figures of interest.

Once subscribed, users will see ad content from those channels.

Snapchat is also displaying sponsored ads between stories. After viewing a certain amount of content from your friends and people you follow, Snapchat has placed ads when transitioning from one story to the next.
Snapchat could generate $250 million in revenue from video ads in 2016, according to eMarketer.
Finally, Snapchat will start to make money through its sunglasses product called "Spectacles." These wireless tech devices record up to 10 seconds of video that can be posted to the app.

Snapchat has started to sell these sunglasses in pop-up vending machines, but has yet to announce a full launch date.

That's how Snapchat makes money. And that leads investors to ask, "How much is Snapchat worth?"

How Much Is Snap Inc. Worth?

The Wall Street Journal reports Facebook offered $3 billion for the company back in 2013. The offer was rejected, and it's a safe bet that the bid would need to be significantly higher today.

But because Snapchat generated just $3.1 million in revenue in 2014, investors want to know why the company has such a large valuation.

One of the reasons is Snapchat's fast-paced revenue growth. In 2015, Snapchat's revenue was $59 million. For 2016, revenue is expected to climb to $367 million.

By the end of 2017, Snapchat's annual revenue is expected to be close to $1 billion.
The other reason Snapchat is valued at $25 billion is its young user base. A vast majority (70%) of 18- to 24-year-olds in the United States are now using the app, which makes it a great market for advertisers trying to reach younger consumers.
Because of its growing popularity, the Snapchat IPO could happen as early as March 2017.

That's why our readers have been asking if they can get in on the Snapchat IPO price. Here's what you need to know before you buy Snapchat stock…

Can I Buy Snapchat Stock at the IPO Price?

As a retail investor, you won't be able to buy Snapchat stock at the same price as institutional investors. IPOs sound exciting because you can, in theory, buy a hot ticket and make some quick cash when the stock quickly appreciates.

Unfortunately, it's not that simple if you're an everyday investor.

Institutional investors (banks, brokers, hedge funds) get to invest first on IPOs because they buy in large volumes and have a large amount of funds available.

For these reasons, you can't buy Snapchat stock at the IPO price.

But there is still a way to profit.
Money Morning Director of Tech & Venture Capital Research Michael A. Robinson recommends that any retail investors jumping into an IPO place a limit order as close to the IPO price as possible.

This will ensure that you don't end up buying in at inflated prices.

We know that our readers still may have a lot of questions about investing in Snapchat and buying Snapchat stock. That's why we made this helpful guide where we answer the most common questions. You can find it, right here.
Follow Money Morning on Facebook and Twitter.

Looks like a great opportunity for a lot of suckers to be separated from their money. Maybe if Yahoo survives they'll be able to buy up the pieces and add it to their eclectic collection of poor investments.