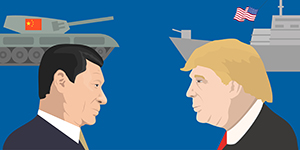 During the phone call, Xi stressed the need for cooperation between China and the United States in terms of trade, reported Beijing's state-run TV channel China Central Television (CCTV) this morning.

U.S.-Sino trade relations were a key political point for Trump's presidential campaign, which kicked off on June 16, 2015. Since that day, the billionaire thrived on promises of hitting China with a 45% tariff on imported goods while taking on Beijing for currency manipulations. This, Trump vowed, would bring jobs back to the United States.

Must See: How to Make a Killing... When Everyone Else Is Panicking

But during last night's "congratulatory" phone discussion, Xi slipped in what many media sites have called a veiled threat to Trump: He stated that cooperation between the two countries "was [Trump's] only choice," CCTV reported.

Starting this morning, the "threat" theme took off in headlines:

And influential Beijing media site The Global Times backed up Xi's warning. It went into detail about exactly what negative consequences will occur should Trump keep up with his anti-China rhetoric...