Fixing flaws in the U.S. corporate tax code would have a huge impact on U.S. companies, many of whom have gotten very good at using current laws to drastically reduce their tax bills.

One of the most prominent ploys is for multinational companies to keep their foreign earnings stashed overseas. By not bringing those profits home, these companies avoid paying the 35% U.S. corporate tax.

Right now, U.S. companies have about $2.6 trillion in foreign earnings waiting to be repatriated. That amount has doubled just since 2008 and is six times higher than it was in 2002. 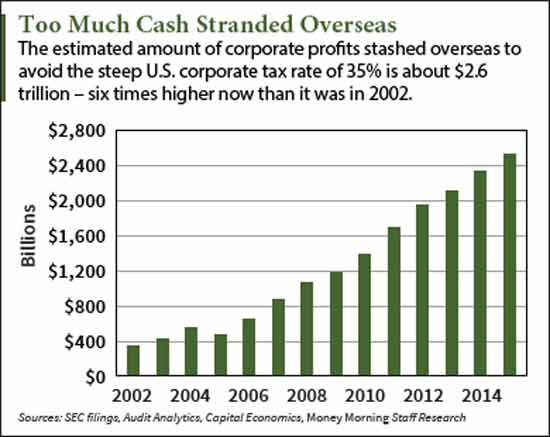 Other companies have become expert at exploiting tax loopholes. In some cases, these companies pay little or no tax despite making billions in profits.

How to Make Millions in Profits - and Never Pay Taxes

According to a study earlier this year by the Government Accountability Office (GAO), 19.5% of large companies that had a profit paid zero in taxes.

On the other hand, you can't blame companies for fighting back against the U.S. corporate tax rate of 35% -- the highest in the industrialized world.

President-elect Trump's corporate tax reform would address these issues. And he has a terrific chance of getting something done when he takes office in January.

Trump's corporate tax reform proposals have much in common with those that have been floating around Congress for the past several years - and from both Republicans and Democrats.

"The likelihood of tax reform is meaningfully greater than most tax experts would have predicted 48 hours ago," Donald Moorehead, a tax partner in the public policy group at law firm Squire Patton Boggs, told Bloomberg the day after the election. "The Trump sweep materially increases the likelihood of passage of a significant tax reform package."

To induce companies to bring most of that $2.6 trillion in profits back to America, Trump has proposed a one-time repatriation corporate tax reduction to 10%. Even if companies returned just half of their overseas profits, that would result in a $130 billion windfall to the U.S. Treasury. Bringing back all of it, theoretically, would mean $260 billion.

To prevent companies from continuing the practice, Trump proposes a permanent reduction of the U.S. corporate tax rate to 15%, along with the elimination of almost all loopholes.

This is a key consideration because the last time there was a "tax holiday" for corporations back in 2004, companies took advantage of the much lower rate (5.25% back then) but then resumed stashing profits overseas - awaiting a future tax holiday.

The Tax Foundation estimates the Donald Trump corporate tax plan would add 4.5% to gross domestic product (GDP) over the next 10 years, although it would add more than $2 trillion to the deficit.

The current House corporate tax reform proposal would lower the permanent rate to 20%, but would set the one-time repatriation tax reduction at 8.75%.

Trending: These 7 "Debt Bomb" Companies Are Set to Explode When Interest Rates Rise

New York Sen. Chuck Schumer, poised to become the next Senate Minority Leader, has talked with the Republicans about the proposal and has said he's willing to make a deal.

However, the Democrats will likely push for a higher permanent tax rate. They also plan to insist on earmarking any windfall from repatriation to cover infrastructure spending.

The seeds of a deal are definitely there. In addition to fixing the corporate tax code, President-elect Trump has also made infrastructure spending a priority, though he said he wants to pay for it with tax breaks to private industry.

Trump may go along with that suggestion from Democrats to get more leverage on the House Republicans, many of whom won't like the fact that Trump's plan adds to the budget deficit.

But a deal will get done if a President Trump wants it to get done.

And while this may look like a threat to the profits of many big U.S. companies, corporate tax reform would provide some surprising benefits...