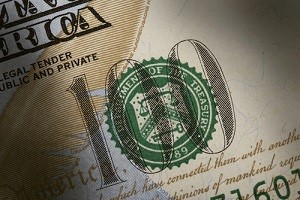 The U.S. dollar rate today (Monday) hit an 11-month high in early trading as traders continue to expect an interest rate hike at the next FOMC meeting on Dec. 13-14.

The U.S. Dollar Index measures the value of the dollar relative to the value of a basket of currencies used by significant trading partners. The benchmark briefly crossed the 100.00 level in morning trading for the first time since December. The index now sits at its best level since January.

The move sent Japan's yen to its weakest level against the dollar since early June. The strength in the U.S. dollar today also took the euro to its lowest since January.

The biggest reason for the rally today is the belief the U.S. central bank will lift its benchmark interest rate 25 basis points at its December meeting. Market odds of a December rate hike currently sit at 85.8%, according to CME Group's FedWatch Tool. That's up from 81.1% at the end of last week, and up steeply from a month ago.

The dollar's sharp ascent has been very surprising. Analysts initially anticipated a weaker dollar under a Trump presidency. As the Republican's victory unfolded on election night, the Wall Street Journal Dollar Index declined as much as 0.8%.

But the dollar has come roaring back since then, rising nearly 2% against major peers as President-elect Trump touts his ambitious infrastructure plans. Trump's hefty fiscal spending plans are expected to increase inflation and boost the case for lifting U.S. interest rates.

Here's a closer look at the U.S. dollar rate's huge climb and what it means for investors now…

What the Rise in the U.S. Dollar Rate Today Means for Investors

Since the election, the U.S. dollar has strengthened 14.2% against the Mexican peso. It has risen 8.1% against the Brazilian real and 2.4% against the Indonesian rupiah.

Before the election, the WSJ Dollar Index had been down 2.4% year to date. That's because many investors accepted that U.S. interest rates would remain lower for longer. Lackluster U.S. growth and worries about the global economy weighed on the dollar earlier this year. That followed a two-year rally in which the greenback rose more than 20% against major peers.

The dollar's weakness for much of 2016 boosted precious metals like gold and silver. Now, the greenback's strength is pressuring both.

Gold and silver are priced in dollars and become more expensive to investors who purchase them with other currencies. Additionally, precious metals offer no yield, making them less competitive to interest-bearing assets.

But the rise in the U.S. dollar rate today is not a reason to stop investing in precious metals. In fact, Money Morning Resource Specialist Peter Krauth just released a new gold price prediction for 2017, and he remains very bullish. Here's how high he sees gold prices climbing from here…