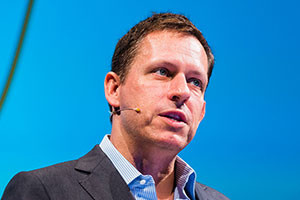 He notably donated $1.25 million to the campaign at the Republican National Convention in July. He also spoke at the event, where he discussed his experiences in Silicon Valley and his outlook on the American economy.

"It's hard to remember this, but our government was once high tech. The future felt limitless. But today, our government is broken. We don't accept such incompetence in Silicon Valley, and we must not accept it from our government," he said. "Donald Trump is right. It's time to end the era on stupid wars and rebuild our country."

Don't Miss: What President Trump Means for Your Energy Investments

Thiel has said that although he is in favor of Trump, he doesn't agree with all of Trump's proposed policies. "I don't support a religious test. I certainly don't support the specific language that Trump has used in every instance," he said at the National Press Club on Oct. 31.

Regardless, his backing of the real estate mogul has been viewed negatively by his colleagues in the mainly liberal world of Silicon Valley. Just last week, one of the recipients of a $100,000 grant from the Thiel Foundation rejected the offer, claiming that he could not accept funds from someone who supports "our next Hitler-elect."

And in fact, Trump's ailing relationship with Silicon Valley has had a pervasive impact on tech stocks…

While his support of Trump may strike a big nerve in the tech industry, it is quite possible that Trump named Thiel to the team in order to bring peace between Silicon Valley and Washington – where the Obama administration has been very popular.

"I build companies and I'm supporting people who are building new things, from social networks to rocket ships," Thiel said at the convention in July. "I'm not a politician. But neither is Donald Trump. He is a builder, and it's time to rebuild America."

Up Next: Money Morning Director of Tech & Venture Capital Research Michael A. Robinson has over 34 years of experience working in Silicon Valley and is a leading tech analyst in the field. In his completely free e-letter Strategic Tech Investor, Robinson shares his insider knowledge of high-tech research and analysis to help readers profit — ahead of the curve. Start reading Michael's insights today, here…