Social Security wasn't originally designed in 1935 to replace the lion's share of a person's pre-retirement paycheck. It was created to supply retirees with roughly 40% of their former earnings each month. 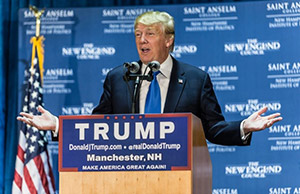 But now, tens of millions of retiring baby boomers are stretching the Social Security Administration's balance sheet extra thin. This means the 40% benchmark won't be maintainable before long...

Social Security's fiscal outlook looks even grimmer on down the line. So much that the program's trustees predicted in June 2015 that the fund will be completely insolvent by the year 2034.

Unless, that is, Washington does something to fix this dire situation ASAP.

When it comes to the U.S.' new President-elect Donald Trump on Social Security, not much is clear in terms of his specific policies and proposals. For now, the candidate's website includes 15 different topics on which he has stated definitive positions -- none of which address Social Security.

What we do know about the candidate's Social Security ideas come from soundbites via his campaign trail.

Here's a compilation of Trump's Social Security plans so far...

Trump was referring to recouping money the United States has given over the years to countries in foreign aid, which amounted to $37.9 billion in FY 2016 alone.

The idea to fund the program using money recovered elsewhere set Trump up to explain his next - and arguably most controversial idea - on Social Security...

One that puts him at odds with members of the GOP status quo already in office.