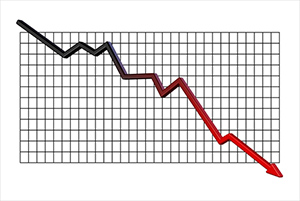 The Dow Jones Industrial Average today fell as investors took gains off the table and prepared for a December rate hike by the Fed Open Market Committee.

But investors are concerned about possible tariffs on foreign goods that could boost inflation.

Let's look at the final numbers Wednesday for the Dow, S&P 500, and Nasdaq:

The Dow Jones slipped 54 points as investors listened to statements from various members of the Federal Reserve and confirmed their suspicions that the central bank will finally hike interest rates next month for the first time since December 2015. The U.S. dollar hit a 14-year high as foreign capital continues to pour back into the United States. Although a rate hike next month would likely be small, it would be another step toward normalization of interest rates after a decade of the Fed's zero-interest-rate policy (ZIRP). According to CME Group's FedWatch Tool, the probability of a rate hike next month now sits at 90.6%.

Trending Story: How Small Investors Can Take on Wall Street… and Win

It was a tough day for the housing market after U.S. mortgage activity fell to a 10-month low. U.S. home buying is under pressure thanks to the recent election. Mortgage rates have surged over the last week since Trump won the White House.

The statement was enough to offset concerns about a huge jump in U.S. crude inventories last week. According to the Energy Information Administration, domestic crude stocks increased by 5.2 million barrels last week, well ahead of the consensus expectations of a 1.5-million-barrel build.

Money Morning Global Energy Strategist Dr. Kent Moors has been following the OPEC deal and the U.S. election closely during his recent travels. Today, Moors offers some insight that you won't find anywhere else. As he explains, both the Trump victory and OPEC will have profound impacts on the global energy industry. But there's one subsector that has a lot of potential in the years ahead, and it's flying under the radar. Read all about it, here.

But the big news today is the Snapchat IPO. Snap Inc. filed for an initial public offering under the condition of confidentiality. Bloomberg reports that the firm filed for its IPO before the election with the Securities and Exchange Commission and set a potential valuation between $20 billion and $25 billion.

Before Snapchat goes public, check out this guide we've prepared for potential investors. Money Morning explains how Snapchat makes money, how the application works, the differences between Snapchat and rival Instagram, and an update on when the firm will go public. Be sure to check out "Your Snapchat Stock Guide Before Snap Goes Public."