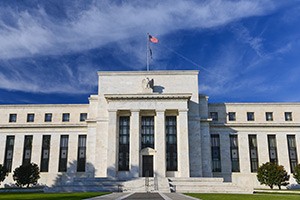 This morning, the Dow Jones Industrial Average is flat in pre-market hours as investors prepare for a busy schedule of speeches from members of the Federal Reserve.

On Thursday, the Dow added 35 points thanks to a strong surge in financial stocks. The banking sector rallied after Federal Reserve Chair Janet Yellen hinted that the central bank will likely move on interest rates in the near future. The markets also benefited from positive economic data and signs that U.S. labor markets are tightening.

The Dow Jones Industrial Average is projecting small losses as investors prepare for a busy day of speeches and digest a slight uptick in oil prices. Markets reacted positively to Fed Chair Janet Yellen's statement before Congress on Thursday. Yellen said that improving economic data would justify an increase in benchmark interest rates "soon." According to CME Group's FedWatch Tool, the probability of a rate hike in December now sits higher than 90%.

Investors also continue to show positive sentiment over the upcoming presidency of Donald Trump. Tax reform, reduced bureaucracy, and streamlined government could be a big boon for business here in the United States. Money Morning Executive Editor Bill Patalon explains that the next four years could be very profitable to investors. How profitable? Just see for yourself.

The price of oil gained in early trading as markets show increased optimism that OPEC will strike a deal to cap production. Markets cheered progress on Thursday when the Saudi Arabian oil minister predicted that the global oil cartel would bind itself to the framework that OPEC countries developed during its September meeting. OPEC plans to meet in Vienna, Austria, on Nov. 30.

But the big news this morning is happening at Tesla Motors Inc. (Nasdaq: TSLA). On Thursday afternoon shareholders of both Tesla and SolarCity Corp. (Nasdaq: SCTY) voted overwhelmingly to approve a merger between the two organizations. At least 85% of shareholders agreed to the deal, which now sets up the opportunity for Elon Musk to create what he calls "the world's largest sustainable energy company." The deal did face criticism. Some opponents called the deal a "thinly veiled" bailout for SolarCity, which has spent a huge amount of cash and seen its stock fall significantly in 2016.