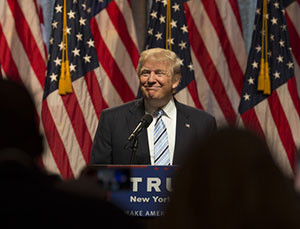 The Donald Trump tax plan might be welcomed by taxpayers...

According to what Trump has outlined so far, Americans will be contributing less of their paycheck to the government. In addition, Trump has said he wants to make it easier for taxpayers to file their taxes without having to rely on tax preparation companies like H&R Block Inc. (NYSE: HRB).

Here's a breakdown of how the Trump tax plan affects your wallet...

How the Trump Tax Plan Will Impact Your Money

Under the Donald Trump tax plan, Americans who make less than the poverty line ($11,880 for a single-person household) will pay no taxes.

In addition, the tax rates for married-joint filers will be slashed into three brackets from seven. This is a huge change that Trump claims will save taxpayers time - and mitigate the stress of Tax Day. Here are Trump's proposed tax plan rates:

The brackets for single filers will be one-half these amounts.

In theory, Trump's tax plan rates will offer a substantial break from current tax levels. For example, those currently making less than $75,000 per year pay a tax rate of up to 15%. That's 3% less than what joint filers would be paying under Trump's tax plan. While that seems like a paltry percentage decrease, in dollar figures it represents savings of $2,250 for those making $75,000. That's more money in the bank.

But aside from income, there's another feature of the Trump tax plan. It changes how you pay taxes on your investments.

And for investors or fund managers, this could prove an unwelcome change...

How the Trump Tax Plan Will Affect Your Investments