As I write this Tuesday afternoon just after market close, investors worldwide have been driving stocks to new all-time highs while ditching U.S. Treasuries and other global bonds based on expectations that President-elect Donald Trump will deliver growth.

That's tantalizing from an investing standpoint, but I see another opportunity that could create jaw-dropping profits.

President-elect Donald Trump had a simple message on the campaign trail - spend, spend, and spend. And that's what the markets are reacting to, now that he's won.

Longer term, there's no question in my mind that you want to be on board.

Not only does President-elect Trump want to rebuild our nation's crumbling infrastructure, but he also wants to take it to world-class standards. Bridges, tunnels, ports, highways, airports, schools... they're all on the list. That means hundreds of millions of dollars headed right into our economy and, hopefully, into your pocket if you're following along.

More immediately, though, there's something else brewing, and that's what I want to call your attention to today.

To be clear, I am not suggesting the markets are going to crash, nor am I telling you to run for the hills.

Leave that to the alarmists who doom themselves to terrible results by trying to predict the unpredictable. They'll never learn.

What I'm talking about is diversifying your investing strategy by blending the longer-term investment perspective we talk about often with a purely technical, short-term tactical move.

The setup is pretty straightforward based on what I am seeing on my screens. 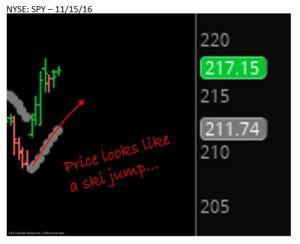 First, there's a ski jump - meaning prices have jumped sharply higher - at a time when emotions are running higher than normal. That's never a good mix because what goes up, must come down.

Second, money is running into the markets recklessly. According to ETF Daily, more than $14 trillion has entered the S&P 500 ETF Trust (NYSE Arca: SPY) since the election, which is a stupidly large amount of money based on nothing more than the fear of missing out, or "FOMO" for short. A $5 billion flow is normally enough to set off my radar, so we're talking nearly three times that here.

And third, momentum has narrowed with each new uptick, yet volatility has fallen by nearly 40% from a VIX reading of 23.01 on Nov. 4 to only 13.72 where it's trading as I type. That tells me new money is becoming pickier while also running out of things to buy. 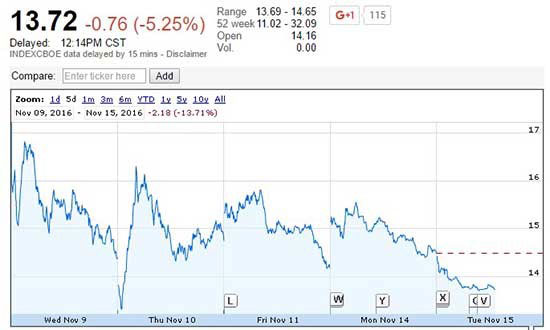 Seems to me that traders are reaching a point where they're likely to take a breather - a term that can mean any number of things, ranging from a simple pause in buying to profit-taking.

For our purposes, it's a little of both.