We've now had about a week and a half to digest the U.S. election and President-elect Donald Trump.

While the price of gold was down about 5.5% by the end of last week, there was even noteworthy action in the bond market.

Since the election, 10-year Treasuries lost an astounding 20%, and I think that's just a precursor of what's to come. It's a point I highlighted in some detail last week, and it remains important as we've seen the trend continue further into this week.

In fact, the losses in long-term Treasuries have been so large, it's possible that we'll see at least a partial reversal. But I also believe it's confirmation of the end of the 35-year bond bull market and the start of its bear.

Yet as investors clamor for yield, they're being distracted by higher long-term yields and the specter of a near-term Fed rate hike. That has the U.S. Dollar Index setting a 12-month high.

Meanwhile, the price of gold's recent weakness is providing a wonderful opportunity to accumulate the precious metal.

And although you may not have realized, there's actually been one place where gold prices just soared to $2,000 per ounce...

Since then, gold prices have been grinding sideways in a range between $1,213 and $1,232.  Monday supplied the most volatility. Tuesday and Wednesday saw the range narrow between $1,222 and $1,232.

But by Thursday, the gold price had weakened on stronger U.S. economic data, as well as the Fed's Janet Yellen reinforcing the outlook for a December rate hike. That caused gold to sink to about $1,211, then bounce slightly to $1,217 by day's end.

Meanwhile, expectations of a rate hike, along with bouncing stock markets and a surging U.S. dollar, have all weighed on gold prices.

Here's how the DXY has been faring over the past week. 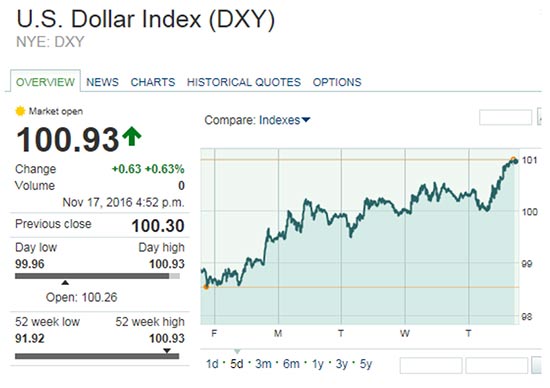 The dollar surges of last Friday and this past Thursday speak volumes in terms of gold's weakness on those corresponding days.

Now that we've looked at how the price of gold has been trending, here's where I see it going from here...

Where the Price of Gold Goes Now

Looking forward to receipt of the Newsletter

I'd like to spend $150.00 a month on lady liberties but something always comes up my credit cards are almost paid off and that quite possibly may become a reality.