With Trump in the White House and Republican majorities in both houses of Congress, an overhaul of Obamacare is a given - and what results will change the trajectory of most healthcare stocks.

Trump often spoke critically of Obamacare, promising to "repeal and replace" it if he won - as have most Republican legislators.

But what we'll end up with next year is very much unclear.

Of the three classes of healthcare stocks, the insurers reflected this uncertainty the most the day after the election. Aetna Inc. (NYSE: AET) was up almost 5%, while UnitedHealth Group Inc. (NYSE: UNH) fell a bit under 1%, and Molina Healthcare Inc. (NYSE: MOH) plunged almost 16%. 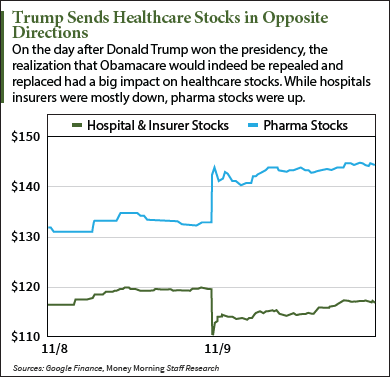 Hospitals got hit hard across the board, on the other hand. That's because they've been clear winners from Obamacare, benefiting from the reduction in uninsured patients showing up at their emergency rooms for treatment they are legally required to provide for free.

But one group of healthcare stocks had the opposite reaction... 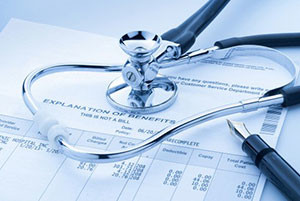 But unlike the other healthcare stocks, these biotech stocks were not reacting so much to the fate of Obamacare. Their rise was a relief rally fed as much by the defeat of Hillary Clinton as it was Trump's win.

"Most biotech and pharma companies might be sighing a sigh of relief because Mrs. Clinton looked like she might do something drastic on drug pricing," Clive Meanwell, chief executive officer of Medicines Co., told Bloomberg on Nov. 9.

During her campaign, Clinton had sharply criticized the 5,455% price hike of the cancer drug Daraprim by Turing Pharmaceuticals last year, as well as Mylan NV's (Nasdaq: MYL) 548% increase in the price of its EpiPen allergy treatment.

While Trump mentioned drug prices in his speeches, it wasn't a focus.

But now the shock of Trump's election is wearing off. And the promises made in the heat of the campaign will prove much harder to put into practice.

In fact, the healthcare ground in Washington is already starting to shift...

Why Trump Can't Gut Obamacare in 2017

While some liberal pundits have lamented the imminent demise of Obamacare in the week since Trump's victory, they're getting ahead of themselves.

While health insurance and hospital stocks would indeed get crushed if all the provisions of Obamacare were repealed, that's an extremely unlikely scenario. Here's why.

Trump has already begun to walk back his promises of a wholesale dumping of the ACA in an interview with the CBS News program "60 Minutes."

He told reporter Lesley Stahl that he wanted to keep one provision that requires insurers to accept customers with pre-existing conditions and another that allows young adults to remain on their parents' insurance plan until age 26.

Trump also said he would not leave people without insurance coverage, suggesting a new healthcare plan would replace a repeal of the ACA "simultaneously."

Related: Will Donald Trump Put Medicaid on the Chopping Block in 2017?

Trump's change of heart stems partly from a recognition of reality.

The Obamacare law has been in force for six years now, so changing its provisions won't be easy. Plus, Trump and the GOP would be hard-pressed to take away health coverage from some 20 million Americans. And, unfortunately, many of the things Republicans have said they would like to remove happen to be mechanisms that pay for that coverage.

Here's what Trump's presidency will mean for healthcare stocks in 2017...

The Outlook for Healthcare Stocks in 2017