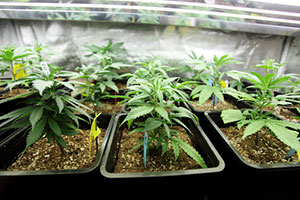 Donald Trump's presidential victory on Nov. 8 has sent markets around the world surging. But the best pot stocks on the market have been outperforming the markets by a wide margin.

Trump won the presidential election, but the biggest winner was the best pot stocks…

A record nine states had marijuana initiatives on the ballot this year. New marijuana laws were approved in eight of those nine states.

Make no mistake, the legalization of recreational marijuana in California was monumental for the industry and a massive catalyst for the top pot stocks…

Without question, pot acceptance is growing and restrictions are easing. That will continue to drive the marijuana industry and the best pot stocks over the next several years and beyond…

Consider this: People in Denver, Colo., may soon find it even easier to smoke marijuana in public.

As The Wall Street Journal reported, the city crafted a local initiative that would provide individuals with more freedom to consume marijuana outside of their homes. Patrons who visit bars and restaurants in Denver will be allowed to smoke pot (purchased elsewhere) outside these establishments under the new initiative. Some are likely to even designate outdoor pot-smoking areas.

Legal marijuana sales (including medical) in the United States hit $5.7 billion in 2015, according to ArcView Research. That was a sizable increase from $4.6 billion in 2014. Recreational sales last year skyrocketed to $1.2 billion. That was up from the $374 million booked in 2014.

As for 2016, retail marijuana sales should hit $7.1 billion this year. That would be a 26% hike from last year. By 2020, legal market sales are expected to surpass $22 billion, according to ArcView.

Take a look at some of the gains pot stocks have already seen. GW Pharmaceuticals Inc. (Nasdaq: GWPH) stock has soared 40% in the last three months, and 1,209% in the last five years. Cara Therapeutics Inc. (Nasdaq: CARA) stock is up nearly 97% since August.

That growth will continue to be a major catalyst for the top marijuana stocks.