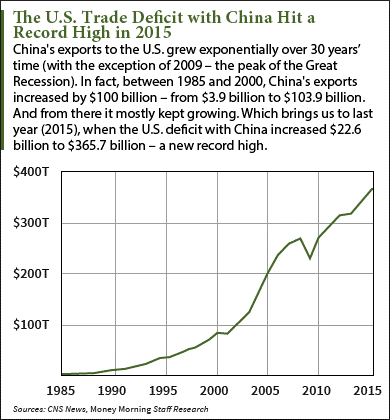 This massive trade deficit exists because U.S. exports to China were only $116.2 billion last year, while imports from China hit a new record high at $481.9 billion — a gap that's expected to continue to grow because, to put it simply, imports are rising faster than exports.

Here's what lead up to this gigantic U.S.-China trade gap…

What Caused the U.S. Trade Deficit with China

China can produce goods for Americans at the cheapest cost. It's able to do so because:

Altogether, this means many American companies just can't compete with China's low costs. And as a result, U.S. jobs are lost.

From time to time, legislators try to impose tariffs or other forms of trade protectionism against Beijing to bring jobs back. For example, a large part of President-elect Donald Trump's campaign was focused on imposing massive 45% tariffs on Chinese goods in order to bring back and/or keep jobs on U.S. soil.

But if Trump's China tariffs were to truly come to fruition, U.S. consumers would have to pay higher prices for their "Made in America" goods.

And ultimately, they don't want to do that. According to an Associated Press-GFK poll released on April 16, 67% of those surveyed said that while they would like to buy goods manufactured from within the U.S., those items are often too costly or difficult to find to do so. Therefore, they'd continue to purchase merchandise made overseas. Just a mere 9% of those surveyed by AP said they would committedly buy "American-Made" goods only.

This means that it's unlikely the U.S.-China trade deficit will change in the near future — which could result in the following negative scenarios within the American economy…

How the U.S. Trade Deficit with China Will Affect Our Economy

It's…All Truth what it say!