Gold prices are moderately higher in early U.S. trading, on short covering and bargain hunting, and amid a weaker  U.S. dollar and firmer crude oil prices on this day.

The U.S. dollar index is modestly lower again today on a pullback after hitting a 13-year high late last week. The recently strong greenback has been a bearish weight on the raw commodity sector the past two weeks.

World bond markets have stabilized early this week, after having seen their yields rise dramatically the past two weeks. Still, it appears that U.S.

Treasury bonds and other world bond markets are entering major bear market territory for the first time in many years.

On the central-bank-watch front, it appears most of the world marketplace has factored into market price structures a Federal Reserve interest rate rise at the December FOMC meeting.

Overnight, spot gold on Kitco.com traded in a fairly narrow range with support at $1,213.20 an ounce and resistance at $1,220 an ounce. 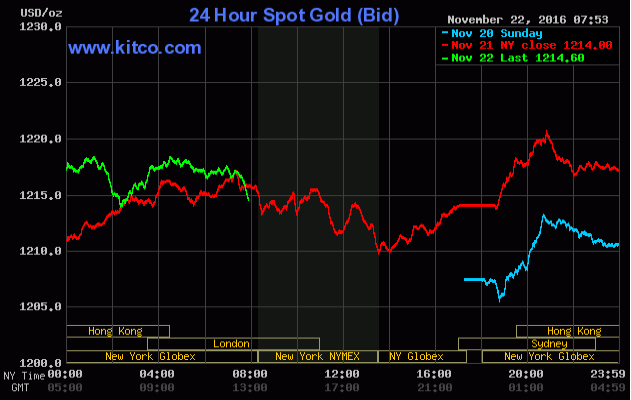