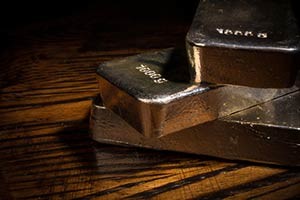 Silver prices today are up 1.6% in afternoon trading to $16.57, but some investors are still discouraged about the recent movement from silver.

What's been driving silver lower in the last few weeks? One of the most obvious culprits has to be the U.S dollar. The widely followed U.S. Dollar Index (DXY) has soared 5% in a short time.

That in itself is enough to push silver prices quickly lower. But there are other contributing factors. Anticipation of a pending Fed rate hike at its upcoming December FOMC meeting is likely floating the DXY. But simultaneously we've been getting the "Trump effect." His promised tax cuts and massive infrastructure spending have sent the markets to new highs.

Silver naturally competes with these other asset classes, and right now they're stealing investors' attention. But soaring yields in long-term bonds, together with bigger deficits (inevitable due to big infrastructure spending), are signaling much higher inflation.

When that reality begins to sink in, investors will quickly flock to silver and bid it up to new heights. And that time may be sooner than you think.

Meanwhile, the DXY had also been drifting sideways. But early on Wednesday, the DXY rallied in short order from 101 to 101.8, then on to 102.5 by the early morning on Thursday.

The effect on silver prices was predictable. On Wednesday morning, it quickly dropped from $16.65 to $16.23, recuperated slightly, and drifted sideways.

By midday Friday, the precious metal had regained $16.51, the same price it closed at on Friday to end the holiday week. Silver prices today are rebounding again, up to $16.57 in afternoon trading.

Where Silver Prices in 2017 Are Headed