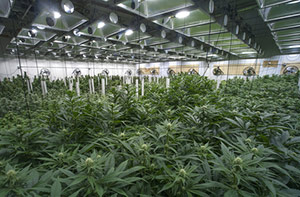 Trying to squeeze in IPO offerings before the end of 2016, three companies are expected to go public on our upcoming IPO calendar for the week of Nov. 28.

The largest IPO this week is Innovative Industrial Properties (NYSE: IIPR). The company is seeking to raise $100 million.

Innovative Industrial was formed in 2016 and is considered a REIT for the marijuana industry. It acquires, owns, and manages specialized industrial properties that it leases to licensed marijuana growers.

This may seem like a niche industry. But the demand for facilities to grow marijuana is only going to increase as more states legalize recreational marijuana.

Brilliant: Cannabis Is the Gold Rush of the 21st Century - 30 Stocks to Invest in Now.

According to Community Financial News, Innovative Industrial Properties has five employees. In 2015, it generated $4.2 million in revenue and $3.5 million in net income.

And for the week of Nov. 28, these are the two other upcoming IPOs for investors to watch...

SenesTech (Nasdaq: SNES) is a rodent control company that was founded in 2004.

According to SenesTech, poisons can also create a "rebound effect" that causes rats to reproduce even quicker when a population starts to die off.

But with SenesTech's non-lethal compound placed in a liquid bate, rats become infertile and die of natural causes in eight to 12 months, according to SenesTech.

SenesTech plans to use the money from its IPO to launch CentraPest, which will help control the rat population. It plans to price SNES shares between $9 and $11 per share in this week's upcoming IPO calendar.

The third company to go public on our upcoming IPO calendar this week is PetroShare Corp. (NYSEMKT: PRHR).

PetroShare was founded in 2012 and is based in Centennial, Colo. It explores the development of natural gas and oil properties in the United States.

According to its website, PetroShares targets opportunities in an "unconventional Niobrara formation" in the Rocky Mountain Region.

PetroShare plans to price shares at $4.63 per share. According to Renaissance Capital, PetroShare has $4.6 million in debt and $2 million in pre-IPO cash.