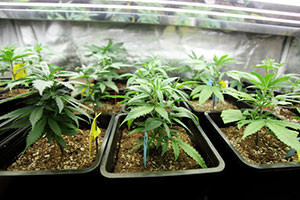 One of the best pot stocks to buy is already up nearly 40% this year, compared to the S&P 500's 8% rise. And this pot stock is poised to rise even more.

This company just made three investments worth $326 million, which give the company wide exposure to the highly profitable marijuana industry.

In fact, on Nov. 10, Money Morning Director of Tech & Venture Capital Research Michael A. Robinson said this pot stock could soar 30% over the next 12 months as more states legalize marijuana.

Before we get to this top pot stock to buy, here's why this Fortune 1000 company is investing so heavily in the marijuana industry…

Why This Fortune 1000 Company Wants Exposure to the Marijuana Industry

Big companies like the one we're about to show you are now embracing the growing public acceptance of marijuana.

That's because over the next three-and-a-half years, the marijuana industry is estimated to grow to $35 billion in value, according to a 2015 report by Bank of America and Merrill Lynch.

A good portion of that growth will be from marijuana cultivators. In fact, the marijuana-growing market could top $100 billion by 2021, according to Robinson.

There's no better way to capitalize on this niche than by investing in one of the world's largest lawn-care and garden products producers, like the company we're excited about.

Why This Is One of the Best Pot Stocks to Buy