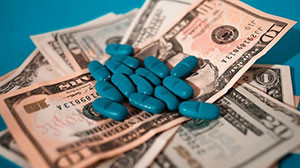 Congress is racing to finalize the 21st Century Cures Act today, which aims to increase funding for medical research and fast-track the drug approval process.

The bill specifically looks to allocate money to the following agencies:

While all of these expenditures seem like medical advancement "shoe-ins," Cures Act opponents claim a core issue with pharma companies is being intentionally ignored...

"At a time when Americans pay, by far, the highest prices in the world for prescription drugs, this bill provides absolutely no relief for soaring drug prices," Sen. Bernie Sanders (D-VT), a strong opponent of the bill, said in a press release on Nov. 29.

Since market competition dictates drug prices in the United States, we have some of the highest prescription medicine costs in the world. For example, U.S. prices are six times higher than Brazil's average prices and 16 times higher than India's, according to researchers from the University of Liverpool.

Sanders, along with Sen. Elizabeth Warren (D-MA), are drawing national attention to the bill by speaking out in opposition of it this week. In a statement to the Senate floor on Monday, Warren blasted the bill as an act of extortion and called for Democrats to "stand up for the American people against the corporate lobbyists who have swarmed Capitol Hill to shape the legislation."

Not only does the Cures Act fail to address the issue of rising drug prices, it promises quicker release on new drugs and devices - a huge benefit to big pharmaceutical companies, but not necessarily to patients.

"In the end, it [the Cures Act] may just add more layers of bureaucracy to an already incredibly complex system, as well as further entrench the FDA in antiquated practices," Tremblay said when the act was first introduced in 2015.

The FDA has already been working to get drugs to market faster in recent years by allowing them to be approved without proof of their long-term benefits. For example, if a drug is found to reduce a tumor's size in a cancer patient, that drug could be approved without a full understanding of how it could impact the patient's health in subsequent years. This is called a "surrogate endpoint."

"What's happening is we are flooding the market with medical products that don't work very well, or we don't know whether they will work," Diana Zuckerman, who leads the National Center for Health Research, told NPR.

If the Cures Act passes in its current form, big pharma companies will be able to use this new "express lane" to get drugs to market even faster - thereby increasing profit potential without any added responsibility.

The Best Biotech ETF to Buy Before 2017