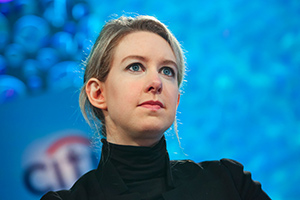 Companies fail for all sorts of reasons - changing political climate, controversy, lack of consumer interest, technology, the list goes on ...

But the real shockers are when the companies you grew up with call it quits. Or when the high-profile startups that the media said would never fail, fail.

These are the companies that affect consumers most when they go under, and can cost investors a lot of money if they aren't ahead of the crowd.

So we've compiled a list of five failing companies that most likely won't be around by the end of 2017.

The list includes one company embroiled in scandal and a multinational business that has been a household name in America for over 130 years...

The health technology company famously dubbed for having the next Steve Jobs as CEO is now in serious trouble.

The downfall started with a scathing article by The Wall Street Journal in October 2015. The article revealed the inconsistencies in the micro-sized blood sampling machinery Theranos used - and the $9 billion startup began to crumble.

In July, the Centers for Medicare and Medicaid Services stated that the company had "put patients in immediate jeopardy" by claiming that the device was more effective than it actually was found to be. Recommendations and analyses based on the results of Theranos' lab tests became jeopardized.

As a result of the CMS' investigation, regulators barred Elizabeth Holmes, CEO of Theranos, from owning or operating a medical laboratory for a minimum of two years.

In compliance with the sanctions, Theranos announced it would close its laboratories and wellness centers in October. Additionally, the company would lay off over 40% of its workforce.

Since Theranos' most well-known service, laboratory testing, is off of the table, it is not expected to survive the next year.

"I don't see a path forward for the company," stated David Nichols, president of the Nichols Management Group, a consultant to and operator of clinical laboratories, in July. 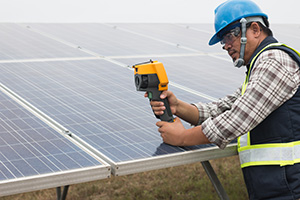 Renewable energy company stocks have been struggling since the surprise victory of Donald Trump, who disavows climate change and has pledged to "cancel all wasteful climate change spending by the government" in his policy statement on Oct. 31. Solar energy producers currently receive a 30% investment tax credit.

That's why shares of First Solar came under pressure after Trump won the election, dropping over 26% in just one month.

The company forecasts sales in 2017 to be well below estimates. In order to cut costs, 27% of its workforce will be cut over the next year.

A 30% slide in prices is to blame for the company's failure. Low demand in China has resulted in a surplus of panels globally, placing pressure on the company to get rid of the product. Customers have delayed signing contracts in hope of further price declines, according to a statement by First Solar to shareholders on Nov. 2.

This next company comes as a surprise, as it is one that has served over 300 million people around the world...

The website that changed the way user-generated content is used for travel is feeling the pressure from competition.

The company also missed both revenue and earnings estimates this year, and here's why...

TripAdvisor's problem is getting users of the website to follow through with transactions without leaving the page. TripAdvisor's revenue per shopper, which is an important growth measure, is a mere $0.45, according to Forbes. This reflects a 12% year-over-year decline for the company.

People may be using TripAdvisor to find the best deals, but they aren't actually purchasing on the site. The company will have to create compelling incentives to get consumers to book on their site over the next year in order to stay afloat.

"If the company is not able to make a turnaround, then there might be serious questions whether TripAdvisor can continue on its own or could become an acquisition target for another online travel agency," Forbes warned on Nov. 28.

The infamous beauty product giant, which was once a household name, is now seeing red.

The use of "Avon ladies," consumer-entrepreneurs who sell Avon products door-to-door, is no longer a viable selling strategy. The majority of women are no longer home all day to answer them.

Additionally, competition from other retailers is squeezing Avon out of the market. Retailers like Wal-Mart Stores Inc. (NYSE: WMT) and Ulta Salon, Cosmetics & Fragrance Inc. (Nasdaq: ULTA) offer consumers a way to purchase high-quality products without the middleman. Online retailers, such as Amazon.com Inc. (NYSE: AMZN), pose another threat to Avon. According to a 2015 survey by EMarketer, 73% of consumers describe Amazon as their No. 1 destination for beauty products.

Up Next: These 6 Retail Companies Are Toast (Get Out Now)

Avon has experienced diminishing revenue and profit for the past five years. The company announced depressing Q3 results in September, when both top and bottom-line numbers fell short of Wall Street hopes.

While Avon struggles, this once popular company is in even worse shape...

# 1 isn't even a publicly traded company?