Last June I wrote to you with an urgent message ahead of the Brexit "tantrum" that wiped $3 trillion from the world's balance sheets in the worst two-day sell-off of all time.

Now it's time to talk "Quitaly" - an event that could be three times worse.

That's what I'm calling Italy's upcoming referendum on Dec. 4, when millions of Italians are going to vote on what looks to be one of the most significant constitutional reforms since World War II ended.

What it means for your money may surprise you - especially when it comes to the profit potential I see being created when it happens.

Brexit Pales in Comparison to This

Millions of investors breathed an audible sigh of relief when the Brexit aftermath proved to be a non-event, but millions more yet have fallen blithely into the trap of believing that it was a "one-off."

That's a terrible mistake - "Quitaly" could be orders of magnitude worse. 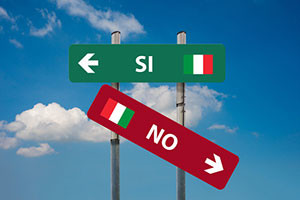 Naturally, politicians and economic experts won't tell you this. They're actively trying to downplay the upcoming vote at a time when all three of Italy's leading opposition parties favor an "exit" from the euro.

The way I see it, Italy's economic growth has lagged badly behind the EU for more than a decade, and Italy's population is reeling from an average 12% drop in real per capita income over the same time frame. It's completely logical that people are going to want "out" of an organization that's made their lives worse.

Italy's economy is in the toilet, with living and economic conditions at 20-year lows. Nearly 20% of all loans on the books are nonperforming, and the banking sector is hemorrhaging cash that should be going to truly viable businesses. The only question is why it's taken so long for populist sentiment to reach a head.

The fact that policy wonks can't see it coming tells me that the unthinkable is right around the corner.

First, the Italian banking system goes into free fall. That's hard to imagine considering that the most visible of all Italian banks - UniCredit, Unione di Banche Italiane, Banca Popare di Milano, and Banca Monte dei Paschi di Siene - are all already down 60% this year and have at least $400 billion in problematic paper.

Second, business confidence plummets. Capital is already fleeing the country, which means, in turn, that businesses are next followed closely by capital controls that are likely being quietly discussed behind doors at the moment. This will further hollow out an already skeletal system at a time when many international investors have already frozen Italian investment plans.

Third, business reforms will fall flat. Unlike Britain, Italy has neither a viable political nor economic system. Crony capitalism is a national sport and reform but a concept. Post-vote incentives, therefore, would fail at worst or take on a life of their own at best. Growth and employment tank.

Then, the real fireworks begin as the euro implodes.

Again, political experts are telling you that there will have to be complex negotiations for that to happen... that you cannot abrogate international treaties by popular vote... that Italy's court system could block constitutional reform... and my personal favorite... that the polls show Italians don't want to leave the euro.

Next up, there'll be a Frexit (France leaving), a Spexit (Spain leaving), a Nexit (the Netherlands leaving).

At the end of the day, the EU could shrink all the way to Merkelislonely.

Here's What to Do Now

This is scary stuff, which is why the overwhelming majority of investors will run for the hills when the markets go haywire if the vote goes through. That's of course why their portfolios are a fraction of what they could be, and why they repeatedly miss out on the ginormous gains they so desperately seek.

So take a page from the likes of the legendary Jim Rogers, Warren Buffett, and the late Sir John Templeton and do three things:

Will you be recommending stocks to buy after this Sunday's Quitaly vote?