(Kitco News) - Global stock markets were mixed overnight, on this first trading day of the month. Asian shares benefitted from Wednesday's OPEC agreement to cut production levels, while stock markets in Europe were pressured on worries about the December 4 Italian referendum on constitutional reforms.

A "no" vote on the reforms could eventually put Italy in violation of European Union rules. U.S. stock indexes are pointed toward weaker openings when the New York day session begins. 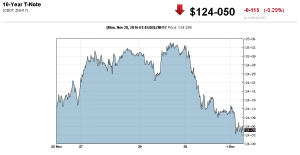 World bond markets remain in focus as yields continue on the rise. U.S. 10-year yields have risen to 2.4% late this week. Reports said the U.S. bond market in November suffered its worst month in seven years. German government bonds are yielding right around 0.3%, which is still a historically low number. However, just several weeks ago German Bund yields were in negative territory.

In overnight news, the Euro zone unemployment rate fell to its lowest level in seven years, it was reported Thursday. The jobless rate fell to 9.8% in October from 9.9% in September. Also, the Euro zone manufacturing purchasing managers index (PMI) was 53.7 in November, which was up slightly from the October reading of 53.5.

The key "outside markets" on Thursday sees the crude oil market firmer and holding Wednesday's big gains of around 10% in the wake of the OPEC oil-production-cutting agreement. The U.S. dollar index trading lower today on a corrective pullback from recent gains. The greenback bulls still have the solid near-term technical advantage as U.S. dollar index prices last week hit a 13-year high.

Traders and investors are keeping an eye on India's stock and financial markets. The Indian stock market has dropped about 7% the past month.

Besides the Italian vote on Sunday, the European Central Bank holds its regular monetary policy meeting next Thursday.

Spot gold prices, on Kitco.com fell through key support over night, but managed to trade in a narrow range with a session high at $1,177.60 an ounce and a session low at $1,166.50 an ounce. 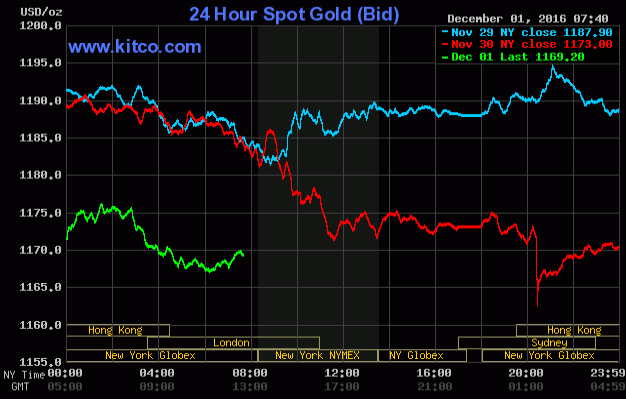