We've just released a new oil price prediction now that OPEC has agreed to slash production, and we are predicting double-digit gains.

WTI crude oil prices have already climbed above $50 a barrel after the November OPEC meeting ended in an official deal to cut oil production. The chart below shows how the price of oil rose sharply after the deal was announced. 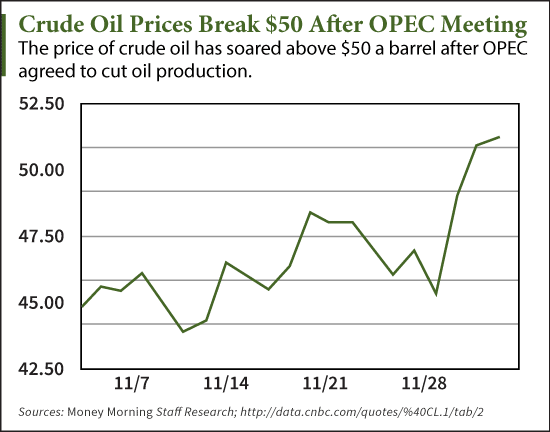 Because the new OPEC agreement was such a big deal, we've made a new oil price prediction. Before we get to our new oil price target, here's why the November OPEC meeting was so crucial for oil prices...

What the Vienna OPEC Agreement Means for Oil Prices

There are two main reasons the OPEC agreement has made investors optimistic about the price of crude oil.

The second, and potentially bigger, reason investors are optimistic is because the agreement shows OPEC is still a viable player in the oil market.

OPEC hadn't reached an agreement on oil production since 2008. And between internal rivalries and chaos across member countries, investors were left wondering if OPEC was becoming obsolete.

With a new agreement in place, OPEC is expected to better manage the price of oil, giving investors confidence the price won't fall below a $50-a-barrel floor.

As Money Morning Global Energy Strategist Dr. Kent Moors said about the deal back in October, "when it comes to securing and raising that floor, OPEC's eventual deal will be highly effective - if successful."

Now that a deal has been reached, OPEC's ability to successfully enforce the agreement will determine where oil prices head next. Moors says even though an agreement was reached in Vienna, "OPEC will have to make sure it actually takes effect in January."

And this won't be an easy task.

Whether OPEC can enforce its agreement plays a big part in our new oil price prediction...

Our Newest Oil Price Prediction for 2017