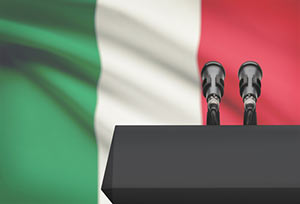 The Dow Jones Industrial Average today pushed to an all-time high on Monday after the markets shrugged off concerns about yesterday's Italy referendum vote.

Investors celebrated positive economic data in the United States, as the services side of the U.S. economy expanded at its quickest pace last month in more than a year.

Investors are increasingly optimistic that the U.S. economy will continue to expand and experience new catalysts thanks to President-elect Donald Trump. He plans to cut taxes, bolster infrastructure spending, and introduce corporate tax reform.

The Dow Jones gained 45 points as investors shrugged off geopolitical concerns in Europe and all 10 major S&P 500 sectors finished in the green today.

On Sunday, Italian citizens voted down a referendum that would have let Prime Minister Matteo Renzi reform the nation's economy. Renzi is expected to resign after the Italy referendum results. The vote was especially worrisome to the European banking and financial sector.

For the first time since Brexit, the polls accurately predicted the turnout of a referendum, in this case the "Quitaly" vote. Here's what the Italy referendum results mean for the markets.

Meanwhile, shares of Apple Inc. (Nasdaq: AAPL) fell more than 0.5% on news that the company's Apple Watch shipments slumped a staggering 71% in the third quarter. According to industry tracker IDC, the wearable technology sector saw just a 3.1% increase in shipments during the quarter. Shares of FitBit Inc. (NYSE: FIT) fell by more than 1.2% on the day.

Investors are keeping an eye on the Federal Reserve as the central bank plans to meet next week to discuss its first possible interest rate hike since December 2015. In a speech this morning, New York Fed President William Dudley said that the United States will see gradual interest rate hikes should the economy continue its positive streak.

The U.S. Federal Reserve has done an immense amount of damage to the American economy over the last decade. While everyone is focusing on rate hikes, Money Morning breaks down another radical option being considered by the central bank to prop up the U.S. market. And this nefarious option could destroy capitalism once and for all.

The price of crude oil hit a 16-month high as investors continue to snap up contracts on hopes that the markets will avoid a global glut in the year ahead. The rally in crude prices comes a week after OPEC announced that it had struck a deal to cap excessive crude oil production

The WTI crude oil price today climbed $0.11 to finish the trading session at $51.79 per barrel. That's the highest price for WTI crude since June 2015. Money Morning Global Energy Strategist Dr. Kent Moors has explained that a price floor above $50 a barrel was one of the primary goals of the OPEC agreement.

The other news today is happening in the transition team of President-elect Donald Trump. According to various reports, Trump is considering Exxon Mobil Corp. (NYSE: XOM) CEO Rex Tillerson for the role of secretary of state.