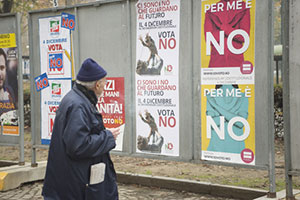 The Dow Jones Industrial Average today is pushing higher this morning despite the results of the Quitaly vote Sunday.

Investors are digesting a statement from New York Fed President William Dudley and reacting to Friday's big announcement that the U.S. unemployment rate has fallen to its lowest level in roughly a decade.

Populism reared its head again Sunday after Italians voted "no" on a referendum that would have allowed the government to reform the nation's constitution. Italian Prime Minister Matteo Renzi announced yesterday that he will meet with his cabinet and resign Monday.

On Friday, the Dow fell despite news that the U.S. economy added 179,000 jobs in November. The official unemployment rate also fell from 4.9% to 4.6%. The sharp decline in joblessness all but ensures that the Federal Reserve will raise interest rates during the December FOMC meeting.

The Dow Jones Industrial Average projected a 77-point gain after William Dudley said that the United States will see gradual interest rate hikes should the economy continue its positive streak. Meanwhile, the prospect of greater instability in the Eurozone and its third-largest economy fueled a 1% slide in the euro.

Sunday's Quitaly vote for constitutional reform could be the most significant European political event of 2016. This new development is another threat to the European Union. The Italian vote was especially worrisome to the European banking and financial sector.

Money Morning Chief Investment Strategist Keith Fitz-Gerald breaks down how populism is sweeping across Europe and the ramifications for investors. More important, these changes could be extremely profitable for investors in the weeks ahead. Fitz-Gerald lays out his three-part strategy on how to handle the Italian referendum vote. Check it out, right here.

Oil prices were rallying again Monday as investors continue to show optimism over OPEC's effort to cap excessive production. The WTI crude oil price today added 0.9%, while the Brent crude oil price increased by 0.9%. It is the first time that Brent crude has topped $55.00 per barrel in roughly 16 months.

Money Morning Global Energy Strategist Dr. Kent Moors explains that the global oil cartel must now enforce the agreement. With so many members looking out for their own economies, it could be a rocky road. But Moors offers a reason - one reason - for optimism. Here's why the OPEC deal could succeed and push crude prices even higher.