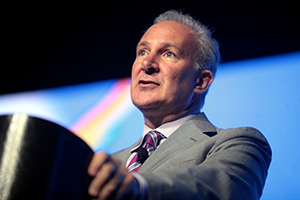 Euro Pacific Capital CEO and well-known economist Peter Schiff predicted to CNBC on Nov. 21 that President-elect Donald Trump's economic plan will result in a massive financial crisis - one even worse than that of 2008.

Schiff, who is known as "Dr. Doom" thanks to his history of accurately predicting market chaos, issued a stark warning about Donald Trump's presidency and the U.S. economy...

"Voting for Trump is not enough to recover the U.S. economy," Schiff said to CNBC on Nov. 21.

The financial commentator noted that he is bearish right now in part because of the massive U.S. national debt, which is expected to exceed $20 trillion in December, making it the highest in the world, according to U.S. News on Dec. 1.

But the main reason Schiff is predicting an immense financial crisis is because of President-elect Donald Trump's fiscal stimulus plans.

Peter Schiff on the Problems with Trump's Fiscal Plan

You see, Trump is proposing to collapse the current seven tax brackets into three brackets of 12%, 25%, and 33%. The current seven brackets range from 10% to 39.6%, according to the Tax Policy Center.

In addition to individual income tax reductions, Trump also proposed slashing the corporate tax rate to 15% from its current 35% to 39%.

These changes may seem beneficial for the U.S. economy and companies because consumers will have more money in their pockets, while companies should be able to afford staying in the states.

But Schiff predicts that reducing taxes will actually have negative consequences...

"If we try to cut taxes and raise spending, with the enormity of debt that we have, we will need more monetary stimuli than ever before," Schiff predicted to CNBC on Nov. 21.

For example, he noted that if tax rates were to be lowered, it would actually increase the use of quantitative easing and the Fed will have to reverse and cut interest rates.

Meanwhile, the Fed is expected to raise interest rates this month for the first time in a year, which Schiff predicts will be a huge problem when payments are due.

"Trump doesn't want to tackle, for political reasons, the real problems that are underlying: Americans are living beyond their means and have been for generations, and we have an enormous debt that is being held together by artificially low interest rates," Schiff said.

Not only will Trump's plan ignore the national debt, according to Schiff, but "it would also put upward pressure on inflation, which is already above the Fed's target," he added.

The Fed's target for inflation is 2%. The current year-to-date (YTD) rate of inflation is 2.20%, according to the Statistics Bureau on Nov. 20.

"For actual economic growth," Schiff said, "we're going to have to confront these problems."

It's yet to be determined if Trump's fiscal stimulus plan will have the impact that Schiff is predicting, but if a massive financial crisis does occur, it's vital to be prepared.

Here's how you can protect your money amid a financial crisis and even profit in the event of a stock market crash, starting right now...

How to Prepare for a Financial Crisis

[Editor's Note: Michael E. Lewitt is widely regarded as the No. 1 credit strategist working today. He is perhaps most well-known for his market analysis and his predictions, where he shows his readers how to keep their money "sure" in all market conditions - including economic chaos. To receive his forecasts, warnings, and advice, sign up for his free e-letter here.]

"Central banks remain hell-bent on printing money and creating inflation in order to deal with epic levels of global debt. Donald Trump's election not only doesn't change that reality, but likely exacerbates it since the president-elect plans to take dramatic steps to promote economic growth that will further increase U.S. debt," Lewitt said on Dec. 1.

Indeed, this lines up almost perfectly with what Schiff is warning will happen once Trump's stimulus package rolls in: higher inflation rates, more U.S. debt, and a lot less money for consumers.

Up Next: The worldwide financial crisis has already started. You've seen it with Greece's humiliation, China's currency devaluation, Brexit, the list goes on. But this is an opportunity, not the end of the world. We'll show you how to protect your hard-earned money and even profit from this event in "How to Prepare for the Market's Super Crash." We urge you to take advantage of this free report now because if you wait too long, it will be too late.

If you listened to this moron for the last eight years, you'd have lost money hand over fist. This guy calls himself an economist. In reality, he's just an angry little man who is convinced that he'll be right one day if he just keeps saying the same thing over and over again.

A crash is necessary with or without Trump. To think that Trump will precipitate a market crash is like seeding clouds during a hurricaine.

Obama had an $800 billion stimulus plan for "shovel ready projects". The result of that plan was $800 billion in debt and no change in our decaying infrastructure. If state and local governments want to fix their infrastructure, they should do it themselves. There is a better likelihood that they will squander less of THEIR funds than the federal government would squander of OUR TAXPAYER funds.