The price of silver today (Monday) is down marginally to $16.69 in afternoon trading. And while silver is known as more volatile when compared to gold, there are times when the opposite is true.

I think we're in the midst of one of those moments right now.

There are multiple ways of measuring and comparing, as well as of forecasting, exactly this kind of behavior. 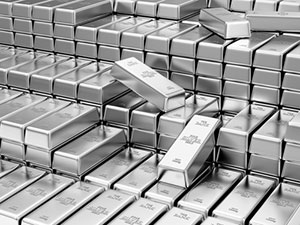 Still, silver's been facing the dual headwinds of a rallying dollar and a propped-up stock market. The investing herd has been flocking to these asset classes, discarding silver along the way.

But for some of the same reasons gold is ultimately heading higher, so are silver prices. In fact, the price of silver may have less overall downside than gold because of its "dual mandate" as a safe haven and an industrial metal.

Editor's Note: A completely unique gold play is forming in the markets. And it's so rare that it's only the third time in 20 years that it's happened. If you get in now, you could see a share of upwards of $13 billion in cash windfalls. Read more.

And I think that's part of what's been going on recently with silver prices this month.

I'll show you with both performance and ratio charts why I think silver is still poised to outperform gold, even in the near and medium terms.

But first, here's a look at what's moving the price of silver today...

Unlike gold, silver's price movements have been more contained over the past week of trading.

The precious metal opened last Monday at $16.63 and moved pretty much sideways to close out at $16.56.

Wednesday had silver give that back. Despite opening at $16.65, silver weakened through the day to close at $16.48.

Now that we've looked at the recent movements in the price of silver, here's where I see the precious metal heading from here...

Where the Price of Silver Is Headed